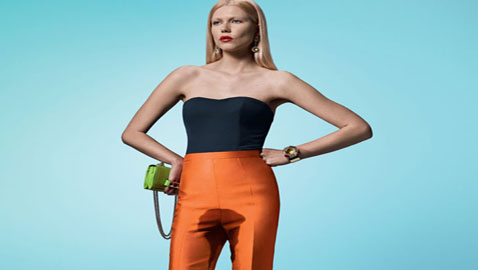 Of all the ad stories that appeared last year there were a few that merited being listed among the most reprehensible and disgusting ads of the past twelve months.  Of course there were many ads that were hugely motivating, brilliant in their conception, innovative and so capably executed that they brought warmth to the heart and a lump to the throat.

On the other hand there were many that made you cringe with embarrassment, marketing blunders that caused outrage and furor and made their creators rush for cover and usher in damage-control systems, with promises of never to repeat such mistakes in the future.

Fashion Brand Harvey Nichols, showed it models so anxious to get into the clothes that, unable to contain their excitement they peed in their clothes. It did not make for very wholesome viewing.

Amazon whilst advertising for the third book for Suzanne Collins’s Hunger Games, inadvertently revealed the suspense from the previous too books, hampering its sales and diminishing reading value for would-be readers.

A diaper brand in an ad campaign showed dads to be clumsy oafs and unconcerned, when it caring for the baby – going as far as to insinuate that if left under their charge, without a mother to care for them, they probably would not live. An uproar made them change their ad, which now showed the dad’s as doting parents who pose no threats to their kids.

A rogue employee uploaded a picture of shod feet standing in a tray of lettuce, with the caption that this is the lettuce that you eat, when you eat at the eatery. Three employees were found guilty and asked to leave but the damage had been done and sales were affected.

On Valentine’s Day, PETA, known for its provocative ads released an ad that said hunks who adopted a vegan diet, would get their testosterone levels raging to optimum levels, increasing their endurance levels in bed that would leave their female partners “bruised and battered” in endless nights and days of lovemaking. It was roundly berated by all and sundry, especially raising the hackles of domestic-violence denouncers.

Soup chain Hale and Hearty, welcoming customers to the starting of a new branch, unconsciously added that those who came would be served any way they wanted by Mary, “the c..t from 47th street.” Needless to say, the gaffe left the owners red-faced, who were hard put to answer the questions that followed.

Gap, went to callous and insensitive limits when they targeted people forced to stay indoors owing to Hurricane Sandy. It admonished them to stay indoors, as it was not very safe outside and whilst they were there, would they kindly indulge in a little online shopping on their site.

Ashton Kutcher, featuring in a Popchips, dressed up as different people, to emphasize on the different flavors of the product.  However, his brown-face getup, typical Indian mannerism and accent, were labeled racist and the company was forced to pull the ad.

During the election, President Obama was the subject of many ads that, under the guise of being witty, were incredibly racist. But one that was really tasteless and showed the advertisers in poor light was a KitchenAid comment on its Twitter feed. Referring to the fact that the President’s grandmother, whom incidentally Obama deeply respected and adored, had died a few days before he was sworn in, KitchenAid tweeted  that even his grandmother was so shocked at seeing Obama becoming the President of the country, that she preferred to die. The company said that it was the handiwork of a person who does not reflect the company’s values and that he or she would be fired.

Last but not the least fashion chain La Redoute had the most bizarre and weird ad – it has four smartly attired kids running towards the camera – what the cameraman failed to notice was that in the background there was naked chap cavorting in the water behind the kids. How stupid?

Where can you find the most Fashion jobs? Click here.