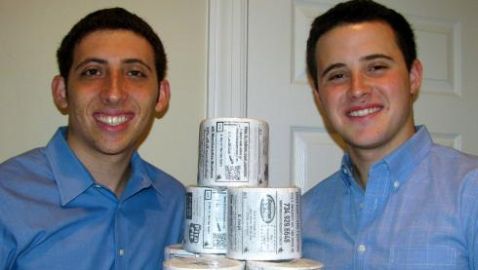 In an interview with USA Today, two brothers, Jordan and Bryan Silverman, discussed their new company that created toilet paper with advertising on it. Their new company, Star Toilet Paper, began selling advertisements and coupons printed on sheets of toilet paper. The brothers are from Rye Brook, New York but their company is based in Ann Arbor, Michigan.

“It takes advertisers a couple of seconds to wrap their heads around advertising on toilet paper,” Jordan said. Their company has a website, which boasts the tagline of “Don’t rush. Look before you flush.”

The brothers want to distribute free toilet paper to public restrooms located at offices, venues, stadiums and restaurants that have ads on them. The places where the free toilet paper will be distributed will be able to save money while grabbing a large audience for Star Toilet Paper.

Jordan graduated from the University of Michigan in the spring with a degree in philosophy. Jordan said, “Advertising is about having people read about your product and this seemed the ideal place to do so. So far, people have loved it.”

Earlier in August, the toilet paper with ads began showing up at the Bel-Mark Lanes bowling alley, the Dance Theatre Studio and the University Towers apartments in Ann Arbor. So far, 50 companies have purchased ads on the toilet paper from the company. It costs half a cent per ad, which amounts to $99 for 20,000 ads. The advertiser also has the ability to choose where they want their ad to be displayed.

A manager for Fish Doctors, Barby Checchi, said, “We thought it was hilarious. Everybody uses it. Who doesn’t need it?”

Northside Grill, from Ann Arbor, is another customer of the ad program. “It’s just getting rolling,” said Jim Koli, the Northside owner. “It was unique and at a certain level it was absurd enough that it would be interesting to do.”

The brothers want to distribute their toilet paper to larger venues such as offices and stadiums so they can reach a greater number of people. Coupon codes are printed on the ads that customers can redeem at the Star Toilet Paper website. Jordan’s brother, Bryan, works with the company in between taking classes at Duke University. Also working for the company is Jason Rak, who is a graduate of the University of Michigan. He works as the company’s chief financial officer.

“I really did think Jordan was a little crazy at first,” Bryan said. “But I love working with him.”

Click here to find out which Advertising jobs are available in New York.