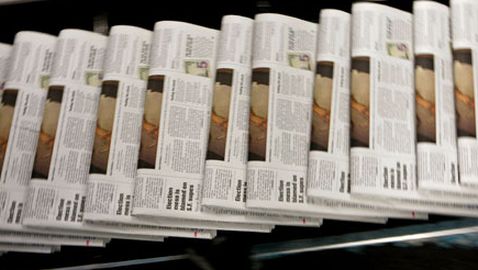 The newspaper industry has been working on different ways to cover the losses that are associated with print advertisements. They have been trying to make up for the losses with gains from the digital advertisement spectrum. However, it seems those efforts have further deteriorated during the first half of this year. Advertising statistics from the Newspaper Association of America were released last week. These statistics showed that during the first half of this year, a total of $798 million was lost for print advertising. There was only a $32 million gain in digital advertising which means that the ratio of losses when compared to games was only at 25 to 1.

Throughout the entire first half of the year, the number of print advertisement losses had slowed down a bit, reaching a total of 8 percent. During the entire year of 2011, the losses were at a staggering 9.2 percent. However, digital advertising was up but was only increasing at a slow pace. It only went up by 1 percent during the first quarter and up by 2.9 percent during the second quarters.

Several different companies, including the Journal Register and Advance, believe that they have the ability to help digital advertising grow at a much faster pace than it is currently growing. They also believe they can help cut costs throughout the entire time that both advertisers and readers steer away from the traditional print newspapers and print advertising and go over to digital advertising and digital news.

The chairman of the NAA, Jim Moroney, recently said in an interview that the statistics provided by the NAA are completely accurate and provide important information on the results of digital advertisements, which are quite discouraging. Many of the newspaper companies are now looking on different sources of revenue aside from just depending on revenue from digital advertisements. Moroney has said, “For every good reason, the industry is still focused on print and digital advertising revenue.”

He also said, “Now more are applying equal focus on print and digital circulation revenue.” There are a number of different newspapers that are now increasing the cost of subscriptions for those who still prefer to receive their paper in print instead of having to go digital. The statistics provided by the NAA also show that the industry is starting to move away from its heavy reliance on revenue that comes from advertising. Several different newspapers have had success with offering different kinds of social media services to a bunch of business that are located in and around the area in which they operate.

Where can you find the most Advertising media jobs? Click here.