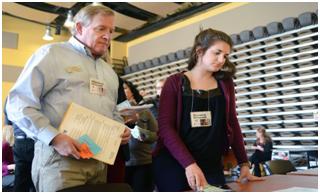 In Steamboat Springs, the commissioner of Routt County, Steve Ivancie, asked the room in front of them what exactly does poverty mean in Routt County and Steamboat Springs. He asked it to the room, not to any person in particular. Without waiting for an answer, he told them that in the county it means working two or three jobs in low-paying trades that can’t be considered careers, just to survive.

Routt County, Colorado is a middle-income county where there are plenty of wealthy residents and above average living expenses. From the outside, it may seem like the majority of people in the county are doing just fine, but when the economy struggles, so do the secret corners of the county where poverty means having to whatever you need to in order to pay your rent, feed your family, and pay your bills.

Ivancie first made to the move to Routt County in 1980 when the economy was booming. There was great tourism in the area and plenty of work to go around. Unfortunately, he was also there when the 1980s economy struggle hit and everyone in the country struggled, including their average-sized Colorado county. He watches as very slowly, the economy kept picking up, adding more jobs and experience lower unemployment rates throughout the state. Ivancie worked, during this time, anywhere he could, including in food service and as a ski patroller.

He gradually worked his way up, finally ending as co-chair of First Impressions for his county and belonging to the Steamboat Springs City Council. Ivancie speaks about always wanting a career working in his community, helping others find job resources and legal assistance they needed. He even helped build the Bridges Out of Poverty simulation in Routt County.

Fast forward to the recession of 2008 and 2009, and he helped his community even more. But now that jobs are looking up in their county, there is still poverty, and he wants to stress how important it is to realize many people in their seemingly stable economic cities, are still struggling with multiple jobs and 80-hour workweeks just to survive.

During this community meeting, Ivancie also tells other member that getting involved is one of the most important things you can do. He told them, as reported by Steamboat Today, Think about getting involved, and think about being a part of the system. Serve on a commission or committee or board and give back to your community. In this community of ours, in Steamboat Springs and out County, you see a lot of it (volunteer service). I’m very impressed.”

Want to see which jobs are available in Steamboat Springs? Click here to see.