Home  » Will Stimulus Bill Only Create Jobs for Citizens? 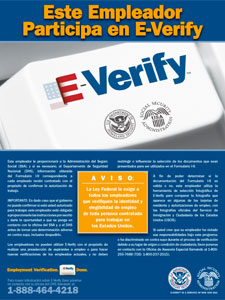 Anti-illegal-immigration groups have launched a campaign to ensure that any jobs created by the Obama Administration’s economic stimulus package go to citizens, and not to illegal immigrants. When the House bill passed this week with a provision designed to do just that, they declared victory.

“What sense does it make to spend hundreds of billions of dollars in borrowed money to create jobs if those jobs aren’t going toward American workers?” said Ira Mehlman, spokesman for the Federation for American Immigration Reform.

An amendment to the House bill, sponsored by Republican Representative Jack Kingston of Georgia, requires contractors that receive federal funds through the bill to verify the immigration status of their employees using a controversial program called E-Verify.

At least two senators have indicated they will push for a similar measure in the Senate version of the stimulus bill.

Immigrant rights groups have countered with their own mobilization, urging legislators to keep worker verification requirements out of the stimulus package. Requiring businesses to enroll in E-Verify could only slow the influx of money and jobs into the economy, said Tyler Moran of the National Immigration Law Center. “It is going to delay the stimulus,” she said. “It doesn’t belong here.”

E-Verify is a free Web-based program that checks the legal status of employees by matching identification information, such as name and Social Security number, with federal databases. As of January 8th, 100,000 employers had signed up for the voluntary program, according to the US Citizenship and Immigration Services.

Registering would be burdensome and costly for small businesses, said Angelo Amador, director of immigration policy for the Chamber of Commerce. He also said legislators should save the immigration discussion for another time. “Immigration is a heated debate that I don’t think we should be having on this bill,” he said.

Since E-Verify was created in 1996, employers have verified the eligibility of more than 18 million workers. More than 96% of qualified employees are cleared automatically by E-Verify, according to the agency.

The Economy Under a Trump Presidency

Top Canadian Companies You Want to Work For
Let’s Get Social
Feel like getting in touch or staying up to date with our latest news and updates?
Related Posts
Latest In Work Relationships