Home  » The Economy Under a Trump Presidency

Summary: Coming off of two terms under President Obama’s White House, America is getting ready to hand off the huge responsibility to President-elect Donald Trump. What does that mean for the U.S. economy? 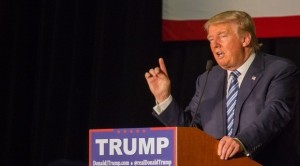 The economy is a hot button topic in any political campaign. Voters want clear assurances that their money will go farther and jobs will be better and more plentiful. While the leading political parties have their general economic platforms, each candidate has their own opinions and plans. Historically, some plans have worked to boost the economy, improve the GDP, and protect and produce American jobs. Other plans have failed to surmount the economic challenges of the time.

These days, with quick, accessible worldwide travel options, global logistics networks, and immediate information sharing, we are truly in a global economy. Global trade has pros and cons. Pros include more efficient companies, lower costs, and competitive prices. Cons for the American economy include trade deficits and job losses due to outsourcing, usually in manufacturing, tech jobs, and call centers.

A major part of president-elect Donald Trump’s campaign platform dealt with his take on the economy. As a billionaire businessman, Trump and his supporters say he has unique experience as the only candidate who has truly created jobs and wealth. Trumps opposition claimed he lacks the political experience to make informed policy decisions on a national and worldwide scale.

Before delving into the economic plan of a Trump White House, I think it is important to look at where we have recently come from and where we currently stand.

President Obama took office as one of our nation’s worst recessions was reaching its bottom, and Obama’s tax-and-spend economic policies, which included large corporate bailouts and stimulus packages, were largely a reaction to the country’s economic condition. Even as Obama was re-elected, the country’s economic issues were some of the biggest campaign issues, as discussed in Granted.com’s article, “Entrepreneurs Wish List for Obama’s Second Term: Decrease Deficit, Increase Jobs and Make Loans Easier To Get.”

By the numbers, several things have improved. The national unemployment rate peaked at over 10%. It is now reported to be around 5%. Job growth was negative, but we have seen 73 months of net job creation leading up to now. US manufacturing was slumping as automobile manufacturers were going bankrupt. Currently the manufacturing output index exceeds its pre-recession levels.

However, there are some areas that have not shown significant improvement. The GDP hit a low of -2.8 %. The GDP is currently sitting at around +2.1%. While that is a significant improvement, the current growth rate is still considered by many to be sluggish. Median household income, which was $54,900 in 2009, has dipped as low as $52,600 and has rebounded slightly to an unimpressive $53,700. Hourly wages have increased only an average of about 2%, which, when accounting for inflation, isn’t much. Basically, more of us are working, but we are not making more money.

So, overall, right now, the United States is doing OK, but Trump promises to “Make America Great Again.” In his speech at the New York Economic Club, Trump promised, “a plan for American economic revival – it is a bold, ambitious, forward-looking plan to massively increase jobs, wages, incomes and opportunities for the people of our country.” Trump sees the recovery from America’s 2009 recession as weak, sluggish, and incomplete. He promises drastic policies that will lead to drastic improvements in our economy.

President-elect Trump’s proposed economic policies are vastly different from President Obama’s. Trump plans to revamp the income tax system and reduce corporate taxes. The campaign has suggested a “Penny Plan” to balance the budget, but promises a large investment in American infrastructure. Trump’s foreign economic plans lean toward a nationalist approach; taking jobs out of foreign countries and putting them back in the United States. He plans to do so by renegotiating or backing out of foreign trade agreements, punishing countries that “unfairly” manipulate currencies to attract companies with low cost labor, and by deregulating American business and energy.

Let’s examine some of these points.

The tax plan under a Trump presidency aims to reduce taxes across the board. Income taxes have a proposed reduction across all tax brackets, promising to focus the lowest tax rates on the working middle and lower-middle class. However, business taxes will see the biggest decreases. In order to make doing business in the United States more appealing, Trump plans to drop the business tax rate from 35% to 15% and move the repatriation tax to 10%, further enticing American companies to bring their foreign revenues back to the United States. While the tax rates will be significantly lower, Trump’s campaign says that the increased individual and business incomes should allow overall tax revenues to remain steady.

In order to balance the budget, the “Penny Plan” would require the annual budget to reduce spending by 1% from the previous year, excluding spending for the military, Medicare, Medicaid, and Social Security. This is significant, since the budget usually increases about 3%, accounting for costs associated with normal growth in the population and economy. Over time, the budgetary savings would add up to much more than a simple 1%. Still, the Trump campaign has not explained how they would accomplish the “Penny Plan” spending reductions, especially in light of planned tax cuts.

Meanwhile, the Trump campaign promises significant spending on infrastructure. The Trump plan would borrow on historically low bond rates to fund a vast reinvestment in roads and infrastructure, potentially over $500 billion. Proponents of the plan cite shortcomings in our current infrastructure as a major cost to business. They also say that rebuilding roads, telecommunications, waterworks, and energy infrastructure will create countless jobs in manufacturing and support operations, and generate accompanying tax revenues. Opponents to the plan say that this level of spending is unnecessary to meet current demands and that the massive debt the government would take on is inexcusable and would far more than offset the budgetary savings from the “Penny Plan.”

Trump is taking a hard line regarding foreign trade policies. In a nutshell, his policy is “do business our way, or be punished.” His policies push for renegotiating NAFTA to favor U.S. interests, or back out of NAFTA entirely. He opposes America’s entry into the Trans-Pacific Partnership. He promises to task the Secretary of Commerce with finding trade agreement violations in order to punish violating countries and level the playing field in favor of American jobs and trade.

Trump’s policies would also put the “currency manipulator” label on China and hold the country responsible for intellectual property theft, imposing tariffs to ensure compliance. This policy is aimed at preventing manufacturing jobs from being moved to China due to unfair Chinese government policies and manipulations.

Opponents to Trump’s plan warn that these policies might backfire, that pulling support from international organizations and “punishing” other countries might create unfavorable attitudes and business environments for U.S. companies operating in or looking to expand to foreign markets and that foreign investors will be more pessimistic about looking to expand operations in the United States. They say that overall, the loss of foreign trade would negatively impact American jobs. Further, they warn that Trump’s policies threaten a trade war with China, one of the world’s largest economies. Consumers in the United States would feel the backlash in the form of significantly higher prices for consumer goods.

Many of the proposals under the Trump administration promise more and better-paying jobs for Americans, with a lower tax burden. There are still a lot of details to fill in to explain exactly how to make it all happen. Will the administration be able to lower taxes and still balance the budget? Will they be able to put into place an infrastructure plan that pays for itself in the long-term by generating tax revenue from creating jobs and boosting the economy? Will the Trump White House be able to negotiate better foreign trade deals without inciting backlash or isolating the American economy? In the end, there is a fair amount that remains to be seen, but we can certainly hope that these plans reach their intended goals.

Authored by: Cameron Griffin
Related Posts
Let’s Get Social
Feel like getting in touch or staying up to date with our latest news and updates?
Related Posts
Latest In Work Relationships