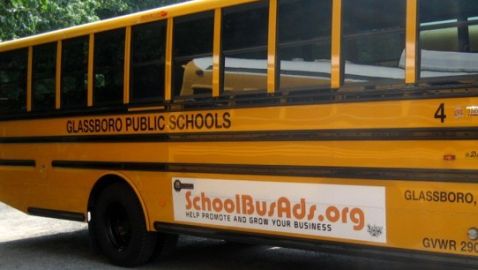 In the Burlington County area, school buses may start to look a whole lot different than they once did before. While these school buses are originally designed to pick up children and take them to and from school, these vehicles can be put to good use in a way that would help to lower the property taxes that parents are forced to pay in the area. It would be a way for the school district to generate revenue, especially at a time when budgets are getting tighter and more cuts are being made. While it is not set in stone, this is the idea that is currently being brought up in both Mount Laurel and Medford. Officials believe it is the best idea to sell advertisements for the outside of buses as a way to generate revenue.

The Superintendent of Schools for Mount Laurel, Antoinette Rath, has said, “We’re going to give it a whirl.” She believes the concept is genuinely a good idea and since it has been given the OK from the school board, they will be giving it a try to see how efficiently it works. The Board of Education President in Medford, Michael Etter, has said that his district has already been talking contracts with an advertising agency in the North Jersey area. He says that advertising firm has spoken about advertisements that could be placed on the school buses and on the school buildings and uniforms. Etter says, “We want to get going (with sales) as soon as possible.” He also said, “The idea actually originated here, but we’ve had to wait a while for the state to give its approval.”

Back in January of 2011, the Governor of New Jersey, Chris Christie, signed a legislation in which he allowed school districts to sell advertisement space on certain parts of the school district, including the outside of the school buses. Even though it was permitted, the school districts had to wait until the month of May until the regulations would be set and approved by the New Jersey State Board of Education. The current regulations that have been set state that half of the money that is generated from these advertisements needs to be used towards the cost of fuel for the students who take the bus. The other half of the money that is made can be used by the school district for a number of different programs and services that will benefit the students. Each of the local school boards will be responsible for approving the advertisements that are featured within the schools and on the school buses.