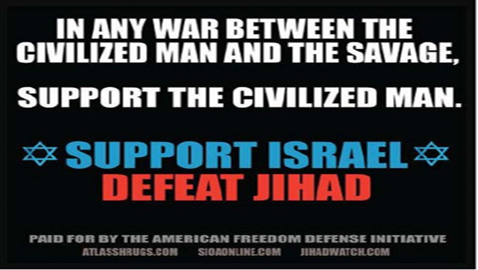 Provocative and inflammatory ads continue to be displayed in the public transit systems. Public outrage, protests that have seen these ads being torn and defaced and two court cases have not been able to prevent those who are adamant of making their voice being heard.

Commuters on a bus or travelling by train in New York or the Capital are certain to see an ad that says, “In any war between the civilized man and the savage, support the civilized man. Support Israel, Defeat jihad.”  Most people understand the ad to mean that Muslims are “savages” and do not merit sympathy.

Activist Pamela Geller wanted to put her offensive ads on the New York City buses, but was denied permission on the grounds that the MTA does not permit ads that ‘demean’ or are prejudiced towards people of other religion.

A persistent Geller took the MTA to court claiming that the decision impinged on the group’s right to free speech and that the MTA was “taking sides on a political issue.”

Geller was victorious with N.Y. District Court Judge Paul Engelmayer denying an appeal in August. MTA revised it rules and said that it would not allow any ads, that “would imminently incite or provoke violence,” to be put on its buses.

Geller’s attorney’s called the new MTA rule “unconstitutional.” MTA has now attached a disclaimer to the ads that were displayed on September 24, saying that it has nothing to do with these ads and that “the display of this advertisement does not imply MTA’s endorsement of any views expressed.”

Geller created a new storm when she signed a $5,600 contract to display the same ads for a month between September and October at 4 Metro stops in the Capital. She was refused permission and Geller took them to court saying that this was in violation of her First Amendment rights.

WMATA said that in view of the volatile situation prevailing worldwide, owing to the anti-Islamic video the ads could fuel and inflame passions. Moreover, the Department of Homeland Security had advised them to review the ads in this new context.

WMATA attorney Philip Straub said during court proceedings argued, that what they were worried about was the use of words like ‘savage,’ ‘war,’ ‘defeat’ in the ad and they were only biding their time, till passions cooled.

Judge Rosemary Collyer didn’t buy the argument and whilst labelling the ads as “hate speech” asked WMATA to post the ads by October 8.

The ad and the controversy that it has raked is not limited to the confines of the courtroom. The ads were defaced and one Washington commuter covered it ad with Post-it notes. A member of the congress sent a call for a boycott of Metro trains.

In an attempt to change the perception the people have of Muslims, The Council on American-Islamic Relations (CAIR), has brought large banners to be put up in the same Metro stations where Geller’s ads are due to be displayed.

The CAIR ads feature a girl in a hijab with a quote from the Koran: “Show forgiveness, speak for justice and avoid the ignorant.”

Geller on her part responded to the ad by submit a new ad, which has an image that opens up old wounds like no other image can, “World Trade Towers Burning. ” Her ad too has a quote from the Koran, it says: “Slay the unbelievers wherever ye find them,” and “Those who disbelieve our revelations- we shall expose them to the fire. As often as their skins are consumed, we shall exchange them for fresh skins that they may taste the torment.”

The heated clash is getting bigger and getting more and vicious and dangerous. However, Dan Stessel, a spokesman for WMATA said that the new ads will probably be displayed. The courts have said that the Metro ad space is a public forum – add to that Geller’s persistence and doggedness, ensure the ads are not going any place.

Whitefish office of our client seeks commercial attorney with 4+ years of experi...

EXPERIENCED PROBATE PARALEGAL - WORK FROM HOME! If you have the knowledge, this is your dream job...

Attorney The candidate must have achieved academic distinction from some of the nation’s most...