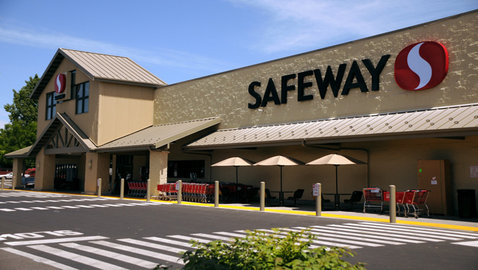 Fitch Ratings in October 2012 affirmed its ratings on Safeway’s debt, but updated its outlook from “stable” to “negative.” The rating was based on Fitch expecting soft sales and operating results at Safeway will continue despite high leverage.

According to Fitch, Safeway has relatively high financial leverage due to leveraged share repurchase activity over the past year. Though the company may not be about to file bankruptcy, some people, like a blog on Around Dublin, wonder if Safeway will survive the next ten years.  The ‘Just for U’ digital marketing effort has given the company some market share, but Fitch is concerned about the company’s overall competitive positioning.

In September 2012, Safeway disposed of its Genuardi’s operation in the Philadelphia, PA area. Safeway’s challenge is that competition from non-traditional grocers is stealing its customer base. Target has begun selling groceries, and Whole Foods Market has opened up new stores to grab customers in the high end.

Safeway has had to expend to comply with new policies.  Effective January 1, 2012, the California Transparency in Supply Chains Act required retailers and manufacturers doing business in California with over $100 Million in worldwide gross receipts to publicly disclose their efforts to eradicate slavery and human trafficking from their supply chains. The law not only affected companies in California such as Safeway, but businesses around the world who did business in California.  The law supported eradicating slavery and human trafficking.  Consumers may start to purchase food or supermarket items depending on retailers’ compliance with the law.

Safeway has taken steps to stay alive by remodeling its stores with additional square footage to make new offerings in health, deli, and bakery. Some think Safeway can avoid going out of business or being acquired by promoting its private label products. Private label brands such as “O Organics” generate higher profit margins for the company while providing savings to shoppers.

The innovation that comes out of Safeway may also be a reason for why the company is suffering financially.  The company does not pay its employees much compared to what high tech companies in Silicon Valley pay, and the company offers few holidays and benefits. For instance, employees have to pay a deductible for basic dental services, and are required to take several medical tests in order to get discounts from their monthly medical premiums.

Some workers may also find the work conditions to be restrictive.  The company requires employees to follow a dress code, and attend formalized department meetings that may drag on for hours.