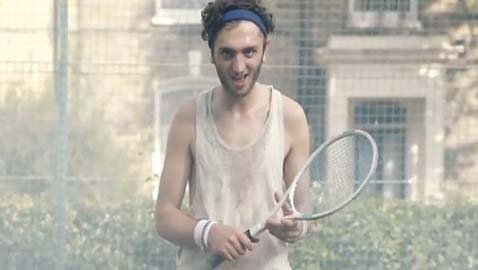 PETA seems to have outdone itself in lewd, suggestive advertising, even though their latest ad has received such accolades and condemnation as being ‘outrageously funny’ to being ‘downright disgusting.’

For years we have been told that oysters and red meat are aphrodisiacs. But in a bizarre and wacky ad, bordering on the obscene, animal rights charity PETA is telling people in no uncertain terms that if they want to increase their virility than vegan is the way to go.

The ad features a group of men, elderly and not exactly the bronzed Greek-God types, but ordinary folk, the you’s and me’s, with phallic-looking vegetables sticking out of their pants. They are grim faced and suddenly break into a jig, with the veggie swinging wildly like a pendulum.

The words accompanying the visuals also make the intent clear, for example when the image has a cucumber sticking out from between the man’s legs, the narration is ‘ a cucumber has never looked so good – or so wicked.’  As if there was an element of doubt there is a gaggle of girls sighing, “Give it. I want it. I take it. I got it.”

Why the charity thinks that a vegan diet will improve sexual performance is that meat and eggs contain cholesterol that can clog our arteries and slow the flow of blood to other parts of the body and the heart. – including those organs that come in handy in the bedroom.

A vegan diet contains none of those and hence people who are on a vegan diet are fitter and healthier. ‘When it comes to making love, carnivores can be as sluggish as the blood trying to squeeze through their clogged arteries – but vegans have the stamina to keep the party going all night long,’ said PETA UK associate director Mimi Bekhechi

However, the ad is so lewd and offensive to the senses, that it may force the viewer to eat his meat in vengeance.

PETA’s ads are never subtle and the group nearly always uses semi-nude models to advertise their views. They are also notorious for using double-entendre to get their message across. Who can forget their ad featuring Sorrentino, with cats in his arms and surrounded by more of the felines with the tagline, “Too much pussy can be a bad thing.”

This ad was commissioned by PETA to spread the message that veganism can enhance your sex drive and was made to mark World Vegan Day. Creative directors Sam Hibbard and Dan Watts collaborated with director Sam Peacock to create the ad.

The ad is certainly outrageously funny but it would also rank amongst PETA’s most sickening ads. But it has again managed to attract viewership and with the video going viral PETA has shown that it knows what it takes to garner attention.

MAVEN IP is looking for a detail-oriented full-time paralegal assistant with experience and kno...

Associate The candidate will work for premier trial and litigation boutique law firm specializing i...