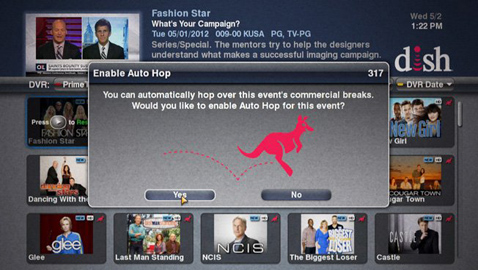 An attempt by networks, primarily Fox, to block Dish’s AdHop, has been rejected with a U.S. District Court Judge in Los Angeles declining to grant Fox Broadcasting’s request to shut down the service, claiming that the show recordings were not authorized.

The sealed ruling handed down by Judge Dolly Gee, Wednesday, forbids the affected companies from commenting on it. The ruling has been kept confidential to give the companies time to remove classified business information.

AutoHop has been a bone of contention, ever since Dish introduced it in May. The service makes it easy for subscribers to skip commercials from shows recorded off broadcast networks, like Fox, ABC, NBC and CBS. Three of them, CBS, NBC and Fox charged AutoHop with copyright infringements and said that the service virtually fashioned an illegitimate video-on-demand service.

Fox had asked for a preliminary injunction on Dish’s service, prior to the copyright ruling.  The network said that it would appeal against the ruling saying that AutoHop is “destroying the fundamental underpinnings of the broadcast television ecosystem.”

Dish on the contrary, felt vindicated and said that the court’s decision not to grant a preliminary injunction was a “victory for common sense.”

Fox said that they were thankful that the judge had ruled that storing programs did violate copyright laws. The network further alleged that Dish was not only running the unlawful service but was also promoting it and profiting from it.

Dish networks were not to perturbed saying that it Fox would be hard pressed  to prove that it had suffered irreversible damage from the copies Dish’s service made.

What other networks find hard to accept is that the Hopper digital video recorder can record and save prime-time programs from offered by the networks for up to eight days. AutoHop allows viewers to completely skip the ads and not merely fast-forward them, by just pressing a button.

Dish said that most viewers fast-forward through ads which they think of as unwelcome intrusions. AutoHop was only make things a little more convenient and easy for Dish’s 14 million customers.

Dish evp and general counsel Stanton Dodge said that the ruling was only following earlier precedents that allowed viewers to watch whatever, they wanted to watch and in whatever manner suited them best, including the right to skip commercials if they did not want to watch them.

Television networks say that their battle against Dish is not merely a fight against a particular service, but because it threatens their very existence and demolishes the ad industry upon which the television industry is almost totally dependent upon for survival.

John Bergmayer, senior staff attorney for Public Knowledge said that consumers are within their rights to record programs and view them later at their time and discretion.

Dish meanwhile refuses to be overawed by the heavyweight networks who are pursuing it in courts and are proceeding full pace ahead with AutoHop, taking out full page advertisements that stop just short of mocking the networks and challenging them on their claims. The ads say, “It’s not about skipping commercials. It’s about having the choice.”

Judge Says, Auto Hop Need Not Close Shop: Dish Calls It A Victory, Fox Says It Will Appeal by Harrison Barnes
Tags: Broadcast, dish
Tweet Like Plus Pin It Share