Home  » Can America Wrench It Back From Them? US Patented Inventions Manufactured In China And Sold Cheaply Back Home 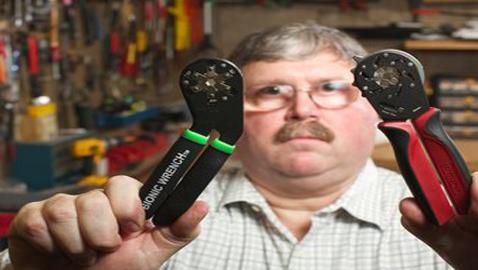 Last Christmas one of the hottest selling items at Sears was their patented Bionic Wrench, an innovative American gadget, that had won for its inventor many awards and accolades.

This Christmas season, Sears has another wrench for sale, similar to the earlier one, in size, color and shape, but with a different name. The earlier one was called Craftsman and its doppelganger was called Max Axess.

Another major difference which makes the matter very grave indeed, is that whereas the Bionic Wrench was an indigenous product, invented and manufactured within the country, its double was made in China.

An alert customer, who saw the lookalike wrench, tried it and found that it was an exact replica of the original down to the packaging, alerted the makers of the Bionic Wrench.

When Sears placed an order for the wrenches and found that they sold well, they placed an order for an additional 75,000 along with the condition that Dan Brown, the wrench’s inventor and promoter, agreed to give them a monopoly and not to sell them to Sears’s competitors, including Home Depot and Lowe’s.

However, much to the manufacturer’s astonishment, Sears shifted from selling the American model to one manufactured in China, with flouting of patent regulations and loss of American jobs, a distinct possibility, and Sears changed stance raises many questions.

The shift at Sears from a tool invented and manufactured in the United States to a very similar one made offshore, has already led to a loss of American jobs and a brewing patent battle.

It has also raised the issue of how American inventors and entrepreneurs can protect themselves from such blatant patent violations. The question they are now asking is, “Are the country’s intellectual property laws, stringent enough to protect them.”

Considering that those who cheat on intellectual property are big companies with clout and financial muscle, the small patent holders stand little chance of redemption in the court of law, for court-battles are protracted and pricey.

Even though the odds are stacked against him, Dan Brown the inventor of the Bionic Wrench is unwavering in his determination to take the matter to court. He is planning to sue Sears, who have refused to answer his queries.

The project manager at the company that manufacturers Bionic Wrenches said that the company had to lay off 31 employees because Sears has not places any new orders for them.

Mr. Brown says that his issue is not just about what will happen to his wrench, but that it has broader more serious connotations. Innovations should lead to more jobs within the country, but they don’t because companies take the new invention and get them manufacturer at cheaper rates elsewhere. He alleged that this is rampant but not as widely accepted as no one just talks about it.

Inventors have to go through a long rigorous process to get their inventions patented. What’s more they have to spend anything between $10,000 and $50,000 to obtain the patent. Moreover, people like Brown stood a high chance of ending up on the losing side as the defendant would argue that the tool was too common to merit a patent, or that its tool was totally different and identifying  it with the original was erroneous.

Sears was careful to make some minor changes in the wrench’s design, which probably means that they were anticipating legal problems and decided to preempt them.

Brown said that he had refused umpteen lucrative offers that would have given him much more money, but would also mean that the wrench would be cheaply-manufactured in China. He refused all such offers saying that “I was raised a different way.”

Can America Wrench It Back From Them? US Patented Inventions Manufactured In China And Sold Cheaply Back Home by Harrison Barnes
Tags: Industry News
Tweet Like Plus Pin It Share

How the HR Department Changed in the Last Ten Years
Let’s Get Social
Feel like getting in touch or staying up to date with our latest news and updates?
Related Posts
Latest In Work Relationships