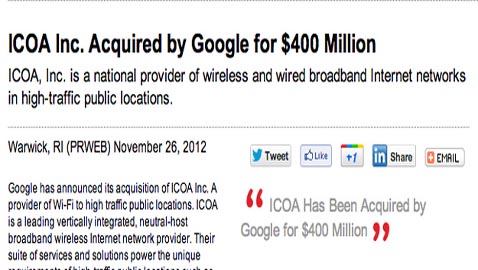 The release titled “ICOA Inc. Acquired by Google for $400 Million” was written in a style to convey that the big fish had yet again swallowed smaller fish, on the strength of their huge financial mettle.

However, there was one minor hitch to the news. There was no truth to it – it was blatantly false and fabricated.

After the news broke out and spread both Google and ICOA denied that such a transaction had ever taken place, with a livid ICOA Chief Executive George Strouthopoulos emphatically stating, “This was a hoax. This is NOT TRUE!! Never had any discussions with any potential acquirers!! This is absolutely false!”

Strouthopoulos hazarded a guess why, the person or persons who were behind this hoax, would publish such brazen and unabashed misleading information. In an email to BuzzFeed, he wrote that perhaps a stock promoter, to serve his own dubious interests, is circulating erroneous, phony and deceptive info. He added that the deception “originated from Aruba.”

Strouthopoulos theory makes considerable sense. The SEC had to halt trading of ICOA’s stock whose trade volumes shot up and from trading at a mere one cent in the morning it spurted to 5 cents.  Almost 330 million shares were bought and sold, according to OTCMarkets.com. A monumental increase from the stock’s normal trading volume of around 2.6 million shares daily.

The originator of the hoax was perhaps aware that the relatively small Wi-Fi hotspot provider’s stock would escalate when news came that it was being taken over by such a multinational giant as Google. He must have planted the Google-ICOA deal to ensure such a spurt in the company’s stock prices. The price of the stock did rise from its one cent to five cents, before falling back to its original price when the hoax was exposed.

News agencies that picked up the story should also have exercised a little more responsibility rather than placing their trust on an agency that is notorious for flouting journalistic standards, accepting and publishing any release as long as they are paid for it. PRWeb said that it would issue a statement later as to how the release came to it.

ICOA Inc oversees more than 1,500 broadband hotspot locations in the country across 45 states. What added credence to the release was that it is an area in which Google has evinced interest in the past and has earlier, actually offered free Wi-Fi via hotspots.

It was obvious that the person or persons behind the scam were trying to game the stock and indulge in what stock parlance is called “pump and dump.” Based on the false and misleading information there would be a bullish market for the stock. The deceitful investor would then sell of all his shares and scoot before others got wind of the deceit – laughing all the way to the bank.

It is apparent that the gullible must have lost a lot of money, their naivety failing to see through the well-planned hoax. If only they had the sense to check out ICOA’s finances, it would have exposed the phony deal’s fishy side – ICOA’s total market cap is below $850,000, and its shares trade for under a penny.