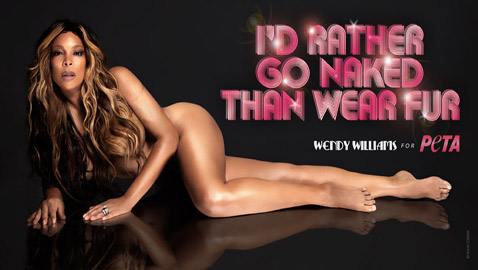 PETA, the People for Ethical Treatment of Animals, is at it again. It has yet again managed to disrobe a celebrity to promote their national winter campaign and wheedle the people against wearing fear. Even though there has been intense criticism about their use of scantily-clad females in ant-fur campaigns, and this time the female in question has shed even those scanty clothes, PETA refuses to deviate from their method of using provocative and risqué ads to promote their cause.

The animal rights group has been accused of trivializing the very cause which they so rigidly espouse, with their ads being referred to as being offensive, crude, and obscene and they themselves being called “press sluts,” but they press on regardless.

The new ad has model and outspoken talk-show host Wendy Williams allowing her lissome and well-toned body to do all the talking as she strips naked, to bare her body for PETA’s  “I’d Rather Go Naked Than Wear Fur” campaign. In the ad Williams is absolutely in the buff with her cascading hair tactically placed to protect her modesty. The photo also reveals a large floral tattoo on her stomach.

She joins the list of celebrities who have shed their clothes for PETA, including such gorgeous beauties as Pamela Anderson and Khloe Kardashian.

Williams acknowledged that there was a time when she enjoyed wearing furs and that she used to wear real mink and fox fur. But now that she knows about the pain and anguish that the animals are put through, she says that she rather not wearing anything than wear fur. She said that she was shocked and pained to know that animals were given electric shocks, killed by clubbing as bullet wounds could damage the fur and even skinned alive for their fur.

Responding to questions that the ad was sexy she said, “I have a little jiggle, but jiggle is what separates the men from the women. If this is a sexy ad, I must tell you, jiggle is sexy.”

She said that we, humans should be comfortable with the skin that God gave us and allow the animals to keep theirs. With this ad Williams joins the long list of celebrities who first forsake fur and then volunteered to appear in PETA ads to create awareness against the exploitation of helpless animals.

PETA said that when people become aware of the fact that millions of helpless blameless animals are slaughtered, beaten, boiled, hanged and electrocuted every year for their fur and that every single clothing of wear that the wearer so proudly flaunts, represents the intense suffering of hundreds of animals, whose only crime is that God gave them beautiful fur.

Moreover, furriers deliberately mislead people into believing that the origin of the fur is not from the animals from which they really are or pass it off as fake-fur, it is but natural that any well-brought-up and considerate human will want to relinquish fur.

Williams also cajoled people, who want to relinquish wearing fur, to donate any old fur apparel that they may have to PETA’s drive of giving such clothing to the homeless this winter. Hurricane Sandy has displaced many in her wake and added to their number. PETA is partnering with New Jersey shelters to distribute warm clothing to them.

The ad targeting holiday shoppers was launched on Times Square on Wednesday.