Home  » Journalists In The Line Of Fire In Conflict Zones: Death Toll This Year Exceeds 119 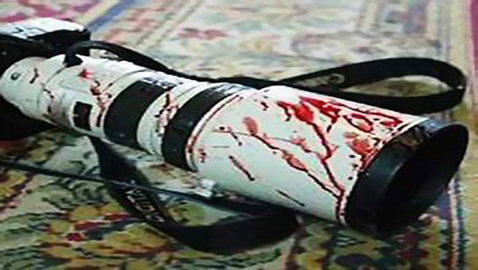 Covering a war is not like conducting an interview in air-conditioned environs amongst people who you know, where conversation is relaxed and soothing. War coverage is often in hostile alien terrain, where the only music you hear is the rat-a-tat of automatic fire and bombs going off, some in extremely close proximity to the journalist, who thanking his good fortune prays and hopes that the next one evades him or her.

However, the war has taken its toll and 2012 has been one of the worst in terms of fatalities of people from the third estate.  A new report from the United Nations and from the International Press Institute says that the worst has been Syria, which accounted for 36 deaths. Other areas were journalists met untimely deaths in the line of duty were Pakistan, Mexico, Somalia and the Philippines.

According to the International Press Institute a minimum of 119 journalists lost their lives during the last 12 months. That’s the most since the Institute starting monitoring journalist fatalities in the conflict zone.

Freelance journalist Anna Therese Day said that it was indeed a deadly year for her colleagues, especially in Syria. Mohammed Aly Sergie, a Senior Editor of ‘Syria Deeply’ said that the problem is that there are rebels on the ground and there are other factions as well, “the journalists are caught in the middle,” he said.

A hotel were a number of media were housed was struck thrice injuring at least three journalists. However, it must be mentioned that even during the harrowing time, the journalists had the courage and presence of mind to bring the strike to the people within minutes of its occurrence.

Israeli spokesperson Mark Regev vociferously refuted Therese Day’s allegations that conflict zone reporting was getting even more dangerous, as even third world countries were not averse to targeting them, saying they don’t target journalists.

Day however disagreed countering that many of the targets were clearly media related and yet were hit. This included television stations, cars with ‘TV’ emblazoned on their sides. She said that it was incomprehensible that the Israeli military with all its sophisticated systems could mistake them for enemy. She said that it was troubling that on one side we had journalists being killed and on the other a government finding excuses.

Considering the dangers involved many major news organizations are hesitant and indisposed to putting the lives of their journalists at risk and hire the services of freelance journalists.

But the problem for the freelancers is they work at their own peril. Day said, that in Syria, big organizations categorically told the freelancers that they would look forward to their inputs and pay for whatever coverage they use. They don’t pay for the expenses occurred. Day says it tantamount to saying we’ll use whatever you unearth through your courage and dare devilry; contact us if you come out alive.

Five journalists lost their lives in Pakistan and the Philippines, where the murderers of 32 journalists in the infamous 2009 Ampatuan Massacre have not yet been convicted. Addario, who has won numerous international awards for his work was taken hostage along with three colleagues from the The New York Times, one of them was the late Anthony Shadid, while covering the uprising in Libya.

International Press Institute  Deputy Director Anthony Mills called the killing of a journalist as the ultimate, most insensitive, unnerving form of censorship and said unless people are not severely punished for such dastardly acts such killings were unlikely to stop. He said that it was highly alarming that inspite of efforts being stepped up to stem journalists deaths, this year’s tally is the highest in the organizations records.

Journalists In The Line Of Fire In Conflict Zones: Death Toll This Year Exceeds 119 by Harrison Barnes
Tags: Broadcast, journalism
Tweet Like Plus Pin It Share