Home  » The Most Amazing Thing About This Cigarette? It Isn’t One: Campaigns For E-Cigarettes Take-On Conventional Cigarettes 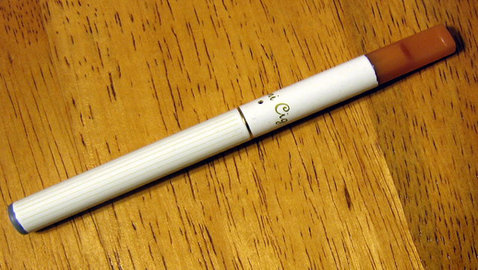 Electronic cigarettes are seeking to be an alternative to tobacco and marketers of such non-tobacco cigarettes are trying to find out what will really appeal to the smokers, who are desirous of making the switch.
They have a decided advantage over the regular cigarettes in as much as it has been decades since the US consumers could see cigarette commercials, of which there was in abundance in the earlier days, when its harmful effects were less bandied about.
Ads for such iconic brands as Camel, Chesterfield, and Viceroy once ruled the airways and smokers still relate with the “I’d walk a mile for a Camel” or “Only Viceroy has a thinking man’s filter … a smoking man’s taste,” taglines that accompanied their chosen brands.
Now they have a chance to relive their memories, inasmuch as advertisers for electronic cigarettes are following similar patterns to entice people to change to their brands. The new ads mirror the time-honored technique for tobacco cigarettes in both substance and in the chosen media for ad placements.
Even the tag lines are as catchy as the cigarettes whose reproductions they are: Ads for Njoy King, which is branding itself as an extremely viable alternative to the real thing, has a tagline to match its intentions, “Cigarettes, you’ve met your match” whereas ads for Blue eCigs tagline, suggests it’s time to pay a little more attention to the harmful effects of tobacco and says “Rise from the ashes.”
Normal cigarettes featured some very big names to endorse them, including celebrities from movies, sporting arenas and even cartoon characters. Not to be left behind, e-cigarettes is also seeking celebrity-endorsements for their products. Actor Stephen Dorff is a regular in an ad campaign for Blue eCigs.
Moreover, ads for both these companies are being aired on networks, just as tobacco cigarettes were regulars on national broadcast networks. As e-cigarettes are not nicotine tainted products, restrictions applicable to tobacco cigarettes do not apply to them and they can have a monopolistic advantage over the traditional cigarettes that they are seeking to replace.
Njoy King is serenading potential customers with Foreigner’s hit song,  “Feels Like the First Time,” but old timers are saying that it lacks the same tilt as the jingles in old commercials, with unforgettable tunes like “Winston Tastes Good Like a Cigarette Should.”
Njoy King is coming out with an ad budget between $12 million and $14 million over the next 6 months and says that its ads will be seen in print, online, on the social media and on its website. Moreover, it is also targeting stores and clubs in a big way.
Bonnie Herzog, an analyst at Wells Fargo Securities in New York and expert on the tobacco industry said that the ads would not only increase awareness and induce people to give it a trial; it will also “bring some excitement to the category.”
E-cigarettes have a long way to go if they want to catch up with their more conventional counterparts. The former manages to rack up sales of $500 million yearly, whilst tobacco cigarettes sales total $ 100 billion – but says Ms. Herzog, this gap could be bridged significantly as e-cigarettes evolve and its spread becomes wider.
Andrew Beaver, chief marketing officer at Njoy Inc., said that our first priority was to get the regular smokers to give the option a trial. Our prime goal is to get it into their hands, he said. The more they feel that it is close to what they’ve been smoking all this while, the more the number of people who will shift to this category.