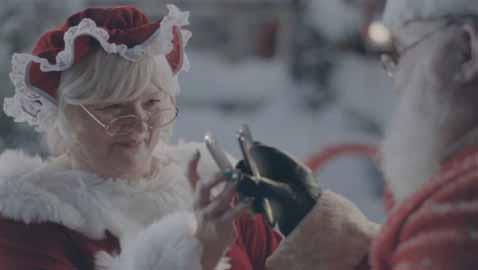 Samsung in good Christmas spirit and with a quirky sense of humor have featured, the grand old man Santa and his portly wife, does she have a name? Yes she does, she’s Layla, in an ad that shows that even after hundreds of years, they are still virile and the testosterone still raging within them.

The ad begins with Santa getting ready to leave on his sleigh when the elves come to him and tell him that they have made a video for him to watch on the sleigh during his journey. Layla Claus with her Samsung Galaxy S III, transfers the video to Santa’s Samsung Galaxy Note II, simply by rubbing both phones together, getting them to embrace one another, as it were.

Then Layla Claus comes and informs him that she too has made a video, but advises him that it would perhaps be better if he did not watch it on the sleigh. She transfers her video on to his smartphone, with a suggestive smile, a twinkle in her eyes and a, you-know-what’s-in-the video, don’t you, nod of the head? Santa is rendered wordless as he enters the sleigh, perhaps pondering whether he should postpone his trip for a while.

Through this ad, Samsung has probably decided to deviate from its Apple- clobbering campaigns and target a new audience, telling them that  the appliance’s uncomplicated wireless transfer service is great for creating and watching naughty videos for those in love to enjoy, in the privacy of their own personal arenas.

The ad is a follow-up on the company’s “The Next Best Thing is Already Here” marketing campaign. The first ad, based on similar lines, shows a husband going on a business trip and she transfers a video on to his phone, by just rubbing both their phones together, advising him not to watch it on the plane – suggestive that it contained material that was naughty and mischievous.

Not only was the ad extremely popular, notching up tens of thousands of hits, as it went viral and also being listed among the top wireless ads of the year.

Samsung just took the proven ad a step further, replacing its characters and settings, from the modern family being replaced by Santa, his reindeer and elves and his North Pole home and talks of flights being replaced by trips on a sleigh – the script remains the same, down to the facial expressions of all the characters.

The only difference from the original ad is that it also features the Samsung Galaxy Note 2 along with the Galaxy S3, as it is readily available now and only logical that the company would like to make its presence felt.

The ad has drawn a mix of responses ranging from “killing a dream” to the calling its “awful and offensive,” and that a symbol of innocence, love and peace, should not be equated with sex. But there are also those who found the ad adorable and that Mrs. Claus looked “cute, sweet and naughty.”

The ad exudes warmth and articulates that old people  are entitled to their happiness and privacy. Their suggestive physical intimacy sends a heartwarming message that excitement need not die out with advancing years – it seems Samsung has a winner on their hands again.

The question remains, what’s on the tape, which Layla hands over to Santa. That’s a secret between the good old chap and his grand dame. One thing is certain it does not contain Christmas Carols, like Santa Claus is coming along riding on a sleigh.