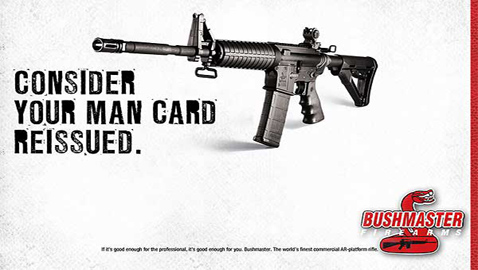 The savage Newport massacre has brought many issues under intense media scrutiny, things that earlier went unnoticed are now being put under the microscope and being analyzed for their possible contribution to the increasing gun-violence that is pervading the country – one such area is the issue of advertising by the gun trade.

The marketers camouflage the real intent of the gun in fancy verbiage and carefully created imagery and project them as must-have products, not weapons, to be used in self-defense, to hunt and for entertainment – whereas the bottom line is that they are weapons and they are designed to kill.

The makers of Bushmaster, the rifle that Adam Lanza legally carried on his person that fateful morn, have added a new dimension to why you should own one – apparently if you do not have one, you are effeminate. The makers have the gall to equate owing the gun with masculinity.

Interested buyers are asked to log on to bushmaster’s site and respond to a series of questions regarding their manhood. If the questions are answered correctly, the person is issued a provisional man-card – something he can flaunt with pride in front of his friends and family. This temporary card can be revoked if friends or family complain that the card holder has done something that is not manly, for example shed tears or behaved cowardly.  However and here is the catch, Bushmaster says that you can get your “Man Card Reissued” by buying a Bushmaster rifle.

Equating masculinity with physical power can have dangerous portends. The very fact that someone is putting into the hands of people deadly weapons, the type that were used by US soldiers in Iraq and Afghanistan and telling that just having the weapon in their hands will make them more of a man is very disturbing and dangerous.

Guns on their own cannot people, but people with macho images of themselves, with ads like these glorifying machismo, most certainly do.  UCLA professor of education Douglas Kellner, author of a book on masculinity and violence said, that the killers examined in his book, exhibit male fury and try to settle scores that they feel have undermined their manliness through aggressive actions. Such maniacs display an obsession for guns and end up creating a situation where both the person and his weapons run unrestrained and uncontrolled, he wrote.

Bushmaster should understand that being a man is to have a sane head on your shoulders where you use your words and not your guns to settle an argument or a conflict. It is doing society a great disservice by projecting their rifle as a must-be-acquired accessory if you want to reassert your endangered maleness.

Enraged viewers are admonishing Bushmaster to sell their weapons as weapons and not something that can be used as a yardstick to measure one’s virility. That is not the reason why one should want to own a gun and encouraging them to do so, is disgusting to say the least. The kids that got killed were real and probably, it was their ad that gave the estranged, miserable Lanza, reasons enough to convince himself that killing helpless children was the right thing to do and show him up as a real man.

Just imagine and ponder over it. Adam Lanza thought he was not man enough. The world had to be shown that he was made of stronger mettle. So what does he do? He picks up a Bushmaster rifle, like the ad makers told him to and the moment he cradles it, his potency increases. Charged with ad-filled machismo he drives five kilometers to the school, the drive further fuelling his new-found testosterone rush and 20 kids and 8 brave adults have their lives snuffed out, killed by a spray of bullets and all because Bushmaster told Lanza, that is how grown-ups behave.

You, Bushmaster are complicit in this massacre is the incensed opinion of millions of Americans.