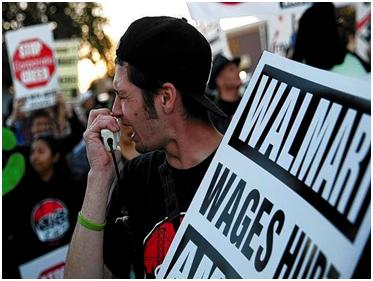 The United States National Labor Relations Board recently issued a complaint against Wal-Mart Inc. The complaint alleges that the company violated labor laws in 14 states because the company took action against its striking workers, according to Reuters.

In the complaint, issued by the general counsel’s office of the NLRB, said that representatives from Wal-Mart made appearances on national television news broadcasts and threatened the jobs of worker if they were to go on strike. The complaint also makes note that the company disciplined workers and fired others for taking part in legal protest activity.

According to the complaint, there are more than 60 supervisors and one corporate officer who are named from the company.

“We believe that our actions were valid. We take our obligations very seriously. We look forward to sharing our side of the facts in these cases with a judge,” Brooke Buchanan said. Buchanan is a spokeswoman for Wal-Mart, which is the largest retailer in the world.

The investigation by the NLRB found that charges against Wal-Mart had merit. Because a settlement could not be reached, one of the 26 regional directors of the NLRB decided to issue a complaint that alleges the violations.

The allegations arose from the company’s response to workers who took part in strikes at stores located in California, Kentucky, Texas, Washington and other states. The strikes occurred during the months of May and June in 2013.

Wal-Mart handed down verbal and written warnings, verbal reprimands, and other punishments to dozens of employees for taking part in the protests. The strikes were held by employees who wanted better work conditions and better wages.

According to the complaint, the company also logged workers’ time as unexcused absences if they took part in the protests or strikes. Wal-Mart has until January 28 to respond to the filing by the NLRB. A trial would be the next step to determine if the company broke the law. An administrative law judge from the NLRB would run the trial. The findings of the judge would either be accepted or rejected by the board.

Walmart Stores, Inc. may have jobs available now. Click here to see them.