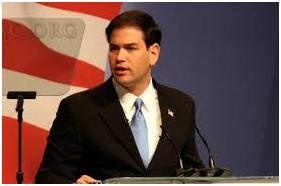 If you think you have heard the last of Senator Marco Rubio, you’re in for a big surprise. Not only is the Florida republican senator facing the failure of immigration changes in 2013 and planning to run for Presidential office in 2016, but he is suggesting future changes for the U.S. Economy. This no doubt is partly due to wanting to get back into good standing and reposition himself in government prior to the 2016 presidential voting season, according to the Wall Street Journal.

Rubio plans to take advantage of the Google-hosted Washington speak that is also hosted by the Jack Kemp Foundation to introduce his ideas for the future of the U.S. economy. This includes improving the process of federal regulatory reviews for natural gas pipelines, creating more access to wireless spectrums, providing a more improved system of monitoring the impact of these regulations, and offering better research tactics. In a pre-speech interview, Marco Rubio discussed ways to improve the economic growth in the U.S., claiming it was not as competitive as what it could be.

He blames this on the national debt, tax laws, and regulatory structure, all of which he says he has plausible solutions for. Rubio’s government agenda and tactics for avoiding another government shutdown or economic struggle is similar to that of Senator Rand Paul of Kentucky and Rep. Paul Ryan of Wisconsin. While he hopes to improve his policy platform, his standing within the party is less confident than it was previously. He only received about 25 percent of the tally that Paul did in recent polls for presidential contenders.

The speech by Rubio, 42, will include a minimum of 10 policy changes that should help improve and boost the U.S. economy, offer better taxable income and investments for businesses, help the ban on crude oil exports, and give a greater push for broker international trade agreements. Prior to the speech, it is the assumption that he will get conservative support for the majority of proposals he has already mentioned.

Because everyone is already aware of Rubio’s views on the immigration situation in the United States, he will not broach the subject during the speech. Not everyone agrees his advice for boosting the economy is going to help him earn his candidacy in 2016, including Joshua Karp from the Florida Democratic Party, who had this to say:

“No one looks less presidential than the guy trying to look presidential. His standing has fallen so fast, so far, after he pushed for some kind of immigration reform in 2016.” However, a former chairman for the American Conservative Union, Al Cardenas, believes you can’t judge a person by every single move he makes through presidential politics.

US Dollar Gaining Momentum
Let’s Get Social
Feel like getting in touch or staying up to date with our latest news and updates?
Related Posts
Latest In Work Relationships