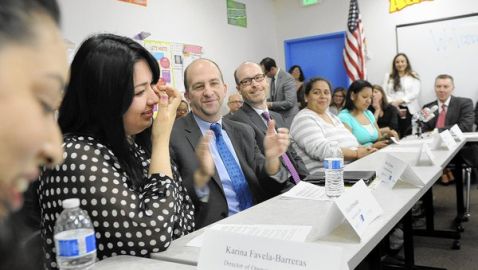 Officials for the school district in Los Angeles made the announcement of a settlement that has been reached. The settlement will provide millions of dollars worth of pay increases for employees for teachers and other staff members. Even with the settlement, many are still wondering what is going to happen with layoffs and whether or not layoffs should occur based on seniority and who has been with the district longer, according to The Los Angeles Times.

The lawsuit was first filed back in 2010 with the intention of helping protect many staff members from unorganized layoffs that would cause turmoil in the lives of many, especially due to already troubling economic concerns. There were three separate campuses listed in the lawsuit because they were losing out on faculty members simply because those specific members of the faculty did not have as much as other staff that were working within other areas of the school district.

There were attorneys who were offering representation to students attending such campuses. However, during the negotiations, the teachers union was going against the school district. As negotiations were happening, the union made it clear that they would like to keep the seniority rule. With seniority determining the fate of employees, anyone who was most recently hired would be the first person to lose their job. In the meantime, the district believed in fighting this old rule, especially since it was not working out so well for each of the campuses.

With this current agreement, nearly 40 schools will have several more staff members than before, including administrative assistants and counselors. Additional training options will also be made available for the teachers. Principals will receive a bonus and mentoring teachers will receive additional pay for supporting their peers and helping train teachers who are new to the job. While it is a win-win situation for all, the students will get to benefit the most from this new agreement, and that is something that is important the L.A. Unified Supt., John Deasy.

Under the new agreement, it is believed that teachers who have worked within the district longer will be willing to work at other campuses to help offer training and other instructors, specifically those who are relatively new, will stay where they are at instead of leaving immediately for a new position. If this were to work out as hoped, layoffs based solely on seniority would be far less likely to happen.

The issue over seniority is happening in other areas as well. A current case is ongoing in Los Angeles Count where seniority-based layoffs are being debated as many wonder whether these layoffs could be causing more harm than good on the students.

Where can you find the most education jobs? Click here.