Home  » Out Of College But Not Into A Job: Youthful Graduates Face Bleak Future As Jobs Dry Out 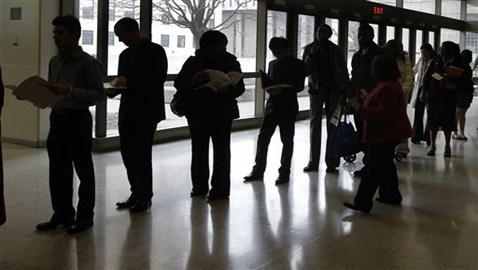 Students who graduated during the recession are still finding jobs elusive and face daunting prospects of either settling for jobs that do not do justice to their academic accomplishments, or stay unemployed for uncertain protracted periods.

One such grad, David Morris says that even with two part-time jobs he is finding it hard to make ends meet. Ironically, Morris has a Master’s degree in Public policy and a Bachelor’s degree in economics, but even though he has been searching for a job in the apt fields for more than a year, a job continues to elude him, leaving him frustrated and discouraged.

He said that he put in around four to five hours into his job hunting and has even learnt how to market himself better, but to no avail. He said that his lack of success was getting on his nerves and he was desperate to get out of the condition he finds himself in.

To further aggravate the matter, graduating students have incurred much higher levels of debts than their predecessors. In June it was an astronomical $870 billion, working out to around $27,000 per student.

This has a life changing impact on them. Without a regular income and the sword of a huge student-loan hanging over their heads, they cannot even contemplate buying a house, or a car or getting married and starting a family. They are left with no alternative but to put future plans on hold.

Matthew Faraci, Senior Vice President for Communications at Generation Opportunity said a recent study reveals that 84 percent of the youth between 18 and 29 will put off making a major life changing decision until incomes improve.

This approach of taking anything that they can get has unfavorable enduring effects that impact future employment and many a qualified youth has been unable to realize his full potential, only because the opportunity avenues were not readily available.

Anthony Carnevale, director and research professor of the Georgetown University Center on Education and the Workforce said that the beginning of a person’s career dictates to a great extent the course it will take and where it will eventually end up. It’s not good to commence badly, he said.

Not only do poorly paying initial jobs reduce financial capabilities, the subsequent inability to pay loans is also detrimental to the emotional and mental state of the student. It is likely to increase anxiety levels and lead to dejection and a low sense of self-worth.

Experts say that something is better than nothing and it is better to do some job, rather than sit idle and wait for the right one to come along. But they say, never lose hope and persist with your job hunt and make your current job, however, insignificant, an experience providing learning opportunity.

However, says Carnevale, if your resources allow you to do so, don’t enter the market at whatever is available, but further augment your studies and make yourself more valuable, be it through education or training.

Morris says that the more he stays out of his specialties, the more he loses touch and the more his skills wither. He says he makes a conscious effort to keep them updated by writing blogs, attending job-hunting seminars and improving upon his social networking skills.

Carnevale also advises students to pick their majors carefully, to avoid meeting the same fate as those who have preceded them. He says choose those majors that have the highest earning capacity, for example science and engineering and those in which jobs are more readily available.

Out Of College But Not Into A Job: Youthful Graduates Face Bleak Future As Jobs Dry Out by Harrison Barnes
Tags: Unemployments
Tweet Like Plus Pin It Share