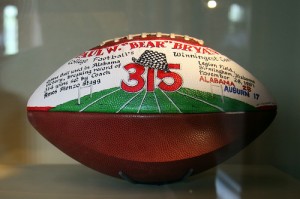 It’s the week of Thanksgiving, and several football-fan worthy events take place during this holiday span: for many college teams, the regular season comes to a head this weekend with schools squaring up against a long-standing rival; the Cowboys and Lions each play their traditional Thanksgiving Day games; and, at least this year anyway, its week 13 and NFL fans everywhere are searching the web for the power rankings.

Officially speaking, NFL teams aren’t ranked, so sports columnists, analysts, commentators, etc. use their sport-savvy noggins to list the teams they consider tops in the world of football. These rankings can vary widely because they are subjective. While it may not be on purpose, it’s inevitable that these rankings and decisions may be influenced by personal opinion, bias’, school of thought, etc.

What does this have to do with your career, you ask? Just as these NFL teams are being ranked weekly, so too are you being ranked in your job. It may not be quite as official as these guys rankings (or at least I hope your boss doesn’t list your names on a tacky wall note like the who’s who of cheerleading try-outs or school play auditions), but who ever is in charge of you is definitely making mental notes about your performance. And just like the big, bad football team rankings, your boss’ judgments will be subjective.

You can’t change your boss. What ever preconceived notions, ideas, bias’, or stereotypes your boss may hold, you gotta try to work around them…or at least ignore them and work to the best of your ability. If it’s to that point though, where you recognize your boss is a total jerk and you find yourself trying to work around their issues, it’s time to say sayonara.

So when you’ve decided to later that place, hop on board EmploymentCrossing. We’ve got you covered in the job department. More than 100 job sites make up EmploymentCrossing and we’re constantly growing. Try it free now. It’ll make you feel better 🙂

What Drink Brings Creativity to Your World?
Let’s Get Social
Feel like getting in touch or staying up to date with our latest news and updates?
Related Posts
Latest In Work Relationships