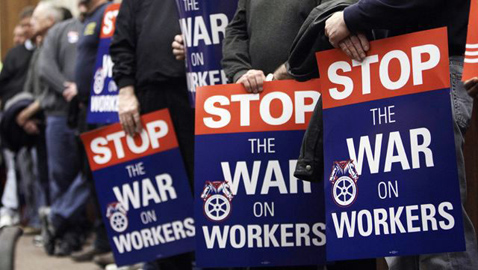 Michigan Unions are breathing fire and getting ready for a huge protest on Tuesday in retaliation of the increasing likelihood of the “right-to-work” legislation proposal going through the Michigan Legislature. Not only are they rallying around with their supporters to make their voices heard as loudly as possibly, they have announced that they already have plans in place to challenge the proposed legislation in court.

However, the unions are resigned to their fate, as they know that the Republican’s have the numbers to ensure its victory but they have vowed that they are going to make implementing of the law extremely bumpy. Moreover, they say they will make life as uncomfortable as possible for Gov. Rick Snyder and his Republican friends and, come election-time, they will have a huge price to pay.

The unions said that even whilst they were going to wait till 2014, they would also seek to recall some of the existing Republican members just as they had done Wisconsin Gov. Scott Walker, who survived a recall challenge after restricting joint bargaining for most public employees.

The move has come as a surprise and caught the unions unawares.  United Auto Workers President Bob King said that “They’ve awakened a sleeping giant” vowing to refuse to give in till the very last. He said that strategies were being prepared for protests and defiance and non-compliance of law.

Realizing and acknowledging that the numbers were heavily stacked against them, both in the House and the Senate and if their protestations were unable to stall the law, they would look to regaining control of the legislature and give a resounding defeat to Snyder, when he seeks reelection two years from now.

King said that this is not just about union members, normal citizens, households that don’t fall under the union; all realize this is not the right things to do.

The right-to-work allows workers to choose, not to join a union or refuse to pay fees, comparable to union dues as a stipulation of employment. The lawmakers say that this will help create a better work climate and also give workers the freedom of choice. Unions however, argue that the law has been formatted to reduce union revenue and dilute their bargaining power.

Republicans are planning to finalize the last voting procedures and send the bill to Gov. Snyder, a Republican, who has already made it clear that he would sign the bills that would make, demanding of dues from workers by unions, illegal and an offense.

Snyder said that he was not looking at a confrontation with the unions. He said that he felt that there are industrious workers in Michigan and they merited being given a choice. GOP leaders said that come what may they are going ahead with the bill. The governor said that he was desirous to bring this to an end, so that other important work for the state could be tackled.

The unions disagreed and said that this tantamount to weakening their base and now you will have two workers working side by side, both enjoying unions’ protections, whilst one pays his dues and the other need not.

Giving the employees choice of not paying their dues and yet allowing them to enjoy the wages and benefits as paying members, was creating an unequal playing ground. They called it “the worst anti-worker legislation Michigan has ever seen.”

However, unions and their Democratic supporters, say that such decisions, bulldozed through on the basis of strength of numbers is as good as declaring war and as  Sen. Coleman Young II, a Detroit Democrat said, “Be prepared to engage in the fight of your life.”

Bernie Ricke, president of the United Auto Workers Local 600 said, “It’s an attack on working families, and we’re gonna be there. We’re not gonna stand for it.”

Where can you find the most Michigan jobs? Click here.

The Most Popular 20 Employer Articles for Gig in 2015
Let’s Get Social
Feel like getting in touch or staying up to date with our latest news and updates?
Related Posts
Latest In Work Relationships
BCG FEATURED JOB