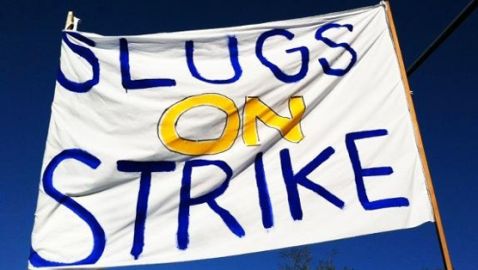 During the strike at the University of California Santa Cruz, at least 20 undergraduate students ended up leaving the strike in handcuffs. Officers arrested these students during the protests, but the strike continues. The reason for the arrests was due to a lack of response after police on campus told students they would need to remove themselves from the entrance of the university. Because it is a protest, these students heard what campus police were saying and chose not to abide by their demands, ultimately leading to their arrests, according to KSBW.

While most of the strike has been rather peaceful, some violence has started happening as well. A woman was told to remove herself from the roadway by an officer. She did not listen and was arrested. In the meantime, a different woman actually went as far as to hit one of the officers on the head, leading to an immediate arrest.

Although student protestors were blocking every entryway possible at the UC Santa Cruz, the school did not shutdown. Students who were not part of the protest were able to continue with their studies, as long as they were able to get in. Most students had to go through the west entrance due to blockages at all other entrances. In order to make entrances available to other students and professors, police repeatedly asked protestors to move and then arrested them when they would not move. Many of these protestors are now facing misdemeanor charges.

While some students protested peacefully, others were more vocal about their frustrations. There was a student who was screaming, pretending to have been shot by a gun, and ultimately was arrested. The student did not get tasered, but he did act as though it was happening. In all reality, he was resisting the arrest at the time, and is now facing charges because of that.

The strike was created in support of the graduate student employees, who currently receive representation from the United Auto Workers union. The strike is supposed to last for 2 days and is happening at other campuses, including UC San Diego and UC Berkeley. The reason for the strike is to take a stand against the unfairness and poor treatment of workers.

When the strikes first started, some professors decided to cancel their classes for the day, even though the college itself was open and available to students. Some other professors decided to hold their classes at other undisclosed locations so that students could avoid a struggle with getting inside of the university. Some of the other students were not exactly thrilled with the strike. One student, Tyler Simowitz, expressed his anger over having his education disrupted, especially when he has to pay thousands of dollars to get that education.

Where can you find the most education jobs? Click here.

What to Ask during a Performance Review
Let’s Get Social
Feel like getting in touch or staying up to date with our latest news and updates?
Related Posts
Latest In Work Relationships