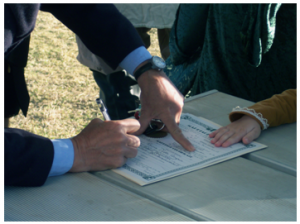 In the month of May employers were able to add 217,000 jobs, which helped the labor market reach a milestone. The workforce has recovered all of the 8.7 million jobs that were lost during the recession, according to USA Today. The unemployment rate remained the same, coming in at 6.3 percent, according to data from the Labor Department.

In the five-year recovery period, employment now exceeds its pre-recession level for the first time. There are 138.5 million people employed. From January 2008 to February of 2010, payrolls dropped by 8.7 million. Since that time, non-farm jobs increased by 8.8 million.

Despite the news, employment is still below the number it should be at when you take into account the population growth and the labor force since the recession.

May marked the fourth consecutive month that job gains came in above the 200,000 mark. This is the first time the labor force saw such a period since October 1999 to January 2000.

There were 216,000 jobs added in the business sector, with 1,000 jobs added in federal, state and local governments. The health care, business services, and leisure and hospitality sectors added the most jobs. The numbers for April were revised down to 282,000 from 288,000.

“Clearly the labor market is picking up some momentum,” Ballew said. “At some point that’s going to translate into wage increases.”

Ballew did say that the recovery has been uneven due to health care and business services leading the pack while construction and manufacturing recovering just a fraction of the jobs lost during the recession.

Job gains were led by education and health services with 63,000 new jobs for the month of May. There were 55,000 jobs added in professional and business services. Leisure and hospitality gained 39,000 jobs in May. Manufacturing added just 10,000 and construction added 6,000.

The number of Americans who have been out of work for six months dropped by 78,000 to 3.4 million, which is another good sign. But, the long-term unemployed still account for 34.6 percent of all the jobless in the country.

For the second consecutive month, the average workweek remained the same at 34.5 hours.

Some analysts of the economy expected the jobs report for May to be weaker than it was after such as strong month of April. ADP estimated that 179,000 jobs were added in May, well below the 200,000-plus added in May.

Browse here for the latest jobs in your preferred sector.

Seven Changes to Help You Have More Financial Freedom
Let’s Get Social
Feel like getting in touch or staying up to date with our latest news and updates?
Related Posts
Latest In Work Relationships
BCG FEATURED JOB