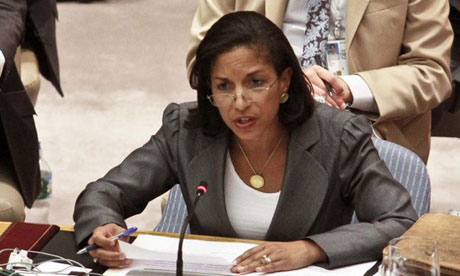 Two black women with immense potential and the capacity to reach the topmost echelons of their respective workplace were not allowed to fulfill their aspirations and forced to abdicate them, simply because they were not of a particular hue and gender.

The first Susan Rice, UN Ambassador, was handpicked by President Obama to become Secretary of State. The moment the announcement came, she was made the target of a bitter campaign to vilify and malign her.

A gang of white politicians led by Sen. John McCain, unable to digest a stinging poll defeat, desperate to make life miserable for President Obama found in her an easy target. They deluged her with a flood of criticism about virtually everything she did, particularly her handling of the Benghazi events.

So sick was she of the tirade against her, that she wrote to the President asking him not to consider her for the post, as she felt that her nomination would lead to an unending fight, which could divert attention from pressing issues facing the country she loved.

Round one to the bigots: They had, through relentless pressure and censure subverted a black woman’s attempts to ascend to a position of command and authority.

This brings us to the second black lady in question. A girl names Rhonda Lee worked as a meteorologist in Shreveport, La. for KTBS-TV. Her employers gave her the pink slip, for a crime as heinous and shocking as clearing up doubts of a viewer who wondered why she was wearing short Afro style hair and was she suffering from cancer. To add insult to injury, he added that she should try wearing a wig as the hair did not suit her and made her look unsightly.

Lee courteously responded to the rather disrespectful and insensitive query, saying that it was the way most black women wore their hair and that she held her African-American ancestry in high esteem.

A month later another viewer recommended that on one of their shows there were too many black children and wondered why. Lee again responded courteously, saying that the kids on the show were randomly selected, rounding of her response wishing the man “happy holidays.”

However, it seems that Lee’s rationalization of the networks selection systems and her afro-hairstyle seriously impacted the networks future and rather than risk such a detrimental employee, they asked her to leave pronto. How ridiculous and how hypocritical?

Even though Lee has not been able to fathom why she was fired, the company maintains that it was because she had infringed upon the company’s rule of not posting on Facebook – a rule that Lee insists was not in the employee’s code of conduct. Some of the viewers were so upset that they have commenced an online petition campaign to get her reinstated.

Let us hark back to the case of ABC’s Jennifer Livingston, who anchored a morning program for the LaCrosse, Wis. She was on the plump side and a viewer said that she was a poor role model owing to her excessive weight. She stood up against the bully, as she rightly should have. Her bosses not only gave her airtime to deal with the personal attack but also applauded her for the brave stance she took. She became an overnight heroine, as her ardent plea on the net went viral and she attracted more than ten million viewers – Lee also stood up for herself and she was sacked.

The cases of Lee and Rice show how difficult it is for black woman at the workplace. Silencing them, bringing them down, maligning them, punishing them for no fault, it seems comes naturally to most Americans, it is as American as the apple pie.

Prejudice Against Black Working Women, As American As American Pie: Separate Yardsticks For White And Black Women by Harrison Barnes
Tweet Like Plus Pin It Share

Remember the 10 C’s in Your Management Style

The New Trend of Defamation Lawsuits
Let’s Get Social
Feel like getting in touch or staying up to date with our latest news and updates?
Related Posts
Latest In Work Relationships
BCG FEATURED JOB