Home  » Are Americans Opting Out Of Parenthood Because A Baby Costs Too Much? Here’s The Bringing-Up Baby Price Tag 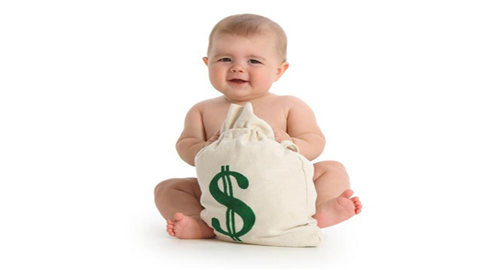 Is it not ironical that most Americans will go to extreme lengths to save for buying a home or to save for their retirement, but will put off starting a family because they feel they can ill afford the additional financial burden?

There are many young couples in the country who have made a conscious decision to put off starting a family until other goals are met. Many believe that this is a case of misplaced priorities and an obsessive monetary decision. The religious minded are calling it sacrilege and against our very basic biblical admonition of “Go ye and multiply.”

The most common response to being told by a couple that they don’t intend to start a family is:  Who will look after you when you are old and unable to take care of yourself. So do you bring in a child for personal gains or because it is ordained by God?

However, there are others who say that the sentimentalists’ are wrong and opting out of parenthood, in these difficult economic times is in reality a very wise and sensible decision and that the cost of having a child should be made tangible, with a dollar tag, before you decide whether you want to become a parent or whether you do not.

Has anyone really sat down and analyzed how much it will cost the parents to raise the baby. According to the Agriculture Department, the authorized source of evidenced data of what US parents spend on the children, anticipated that an average middle-income twosome spent between $12,290 and $14,320 a year on a child, in 2011. Couples in a higher income bracket who live in urban areas, where the dollar does not go as far as in the rural areas, spent anything between $22,760 and $27,720 on each of their kids.

These expenses are calculated up to the age of 17. Later when the kid grows up, a major chunk of his expenses will include college fees and fuel charges for his vehicle not to speak of extra pocket money. Also many parents, especially mothers, have to leave their jobs to look after the child and this foregoing of earnings, is also a huge expense that not many estimates take into account.

Economists say that if the couple decides not to have a baby they can save on expenses like buying or renting a smaller home. They need not restrict themselves to neighborhoods that have better schools and need not buy that compulsory American family accessory, “a pet dog.”

Traditionally, having children was something that was taken for granted, but with increased understanding and the easy availability of contraceptives has made it a matter of choice. Compared to earlier generations, there are many more women opting out of motherhood today than before.

Kristin Harad, an expert in helping new parents said that those who did not have any children are ignorant of how expensive it is and they are absolutely shell-shocked when they are apprised of the costs.

Sadly, there are not too many informative sources that can tell why it could be a prudent move to postpone parenthood. Most books available on the subject, say little more than, the more the mouths to feed the more it will cost – now who did not know that?

Furthermore, it would be foolhardy to believe that children will be an insurance policy for eldercare. Studies show that once the children branch out on their own, they very much lead their own lives. Moreover, professional care is always available and it is invariably more efficient and committed. Parents also have to compromise on their original financial aspirations and often they get watered down, because new expenses have cropped up.

Making a conscious decision of not having a baby calls for huge emotional sacrifice and it does not tantamount to selfishness – it is a practical decision. Children will need someone to care for them and they will have needs that will cost a lot of money and those will only start after they are brought into this world.

Are Americans Opting Out Of Parenthood Because A Baby Costs Too Much? Here’s The Bringing-Up Baby Price Tag by Harrison Barnes
Tags: baby costs, resources
Tweet Like Plus Pin It Share