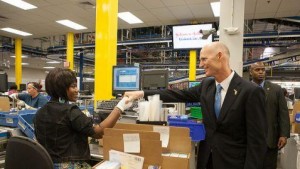 Florida’s governor, Rick Scott, brags that the state has the best business climate in the country, but he also laments the fact that Florida trails the rest of the country when it comes to factory jobs, according to The Palm Beach Post.

“We should have way more manufacturing jobs,” Scott said during a speech to the Forum Club of the Palm Beaches.

“That’s less than half the national average,” Scott said. “With our seaports, with our universities, with all of these things, we should have above the national average in the number of manufacturing jobs. But we’ve put our state at an economic disadvantage.”

Scott said that he has two major goals during the current legislative session. Those goals are to acquire a pay raise for teachers and to cut the sales tax on manufacturing equipment in the state.

“We’ve got to get rid of that tax,” Scott said.

The state of Florida is one of just a few states in the country that charges a tax on factory equipment. Manufacturers are allowed to claim tax exemptions on machinery they purchase, but the machinery has to improve the productivity of the company for the exemption to occur.

Across the country, the manufacturing sector has added 215,000 jobs in the past year, according to data from the Bureau of Labor Statistics. During that same time, the state of Florida has added just 1,500 manufacturing positions. An economist from the University of Central Florida, Sean Snaith, said that the sales tax issue is probably just a small one for companies.

“Is the sales tax the linchpin that’s going to unleash manufacturing growth in our state? My guess it’s probably a piece of the puzzle but not the entire puzzle,” Snaith said.

Snaith noted that the most important issue for employers is a strong supply of skilled workers who can enter factory jobs that require math skills and technical expertise right now.

“The labor force is always going to be a stronger attractant than trying to tweak corporate taxes or sales taxes,” Snaith said. “You can get your equipment cheaper, but who’s going to run it?”

City of Scranton Looking to Hire Special Counsel
Let’s Get Social
Feel like getting in touch or staying up to date with our latest news and updates?
Related Posts
Latest In Work Relationships
BCG FEATURED JOB