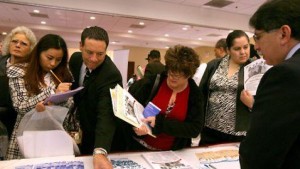 Representative Duncan Hunter, a Republican from California, is using rumors of foul play on the jobs report that was released last Friday to push legislation that he claims will capture the country’s employment figures. The report from Friday showed that the unemployment rate for the country dropped under 8 percent just one month prior to the presidential election. Hunter did not come right out and say that the report from the Bureau of Labor Statistics was changed by politicians.

Instead, Hunter said that the rumors about the report ‘raises interest’ in the method used to determine the unemployment rate in the country. He went on to suggest that his method could be a more accurate one to use.

“The latest unemployment report raises interest in both the method for calculation, the accuracy of the process for determining unemployment and the correlation to coinciding data,” Hunter wrote in a letter that was submitted to House Education and Workforce Committee Chairman John Kline (R-Minn.).

“It is my recommendation that the committee begin evaluating the methods and factors that are currently used to calculate monthly unemployment in order to determine whether existing practices produce the most accurate and reliable information or if there are ways to improve the process for calculation and reporting,” Hunter wrote.

Labor and economic experts from both parties have said that rumors of the White House purposely lowering the unemployment rate before the election is an impossibility logistically. Political appointees do not put together the jobs report. Instead, it is constructed by officials at the Bureau of Labor Statistics.

The legislation being touted by Hunter would require that the Bureau of Labor Statistics publish another employment measure as the ‘official’ unemployment rate. The new measure would account for those who stopped searching for work, which would put the unemployment rate at 9.3 percent instead of the current 7.8 percent.

Hunter said that the new method would be used to “acquire a more accurate and reliable reading of the national unemployment situation.”

Republican Representative Allen West from Florida said that the White House changed the numbers, saying on Facebook that it is “Orwellian to say the least.”