Home  » Employment in Alaskan Fisheries Increased from 2011 to 2012 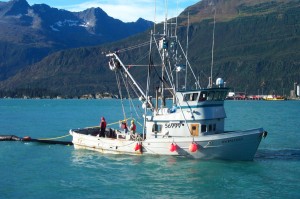 The Alaska Department of Labor and Workforce Development issued a new report that shows growth in the seafood harvesting industry. The report notes that in 2012, the industry had 8,189 jobs, which is an increase from 8,067 in 2011.

When it comes to volume and value, groundfish is number one in the state of Alaska. Boats in the groundfish industry can procure large amounts of fish without increasing the need for more employees.

In 2012, there were 31,800 commercial fish harvesters who fished for a living. They are considered self-employed by the state because they do not secure a typical salary. They also do not come under unemployment insurance, which prevents them from being tracked in traditional manners by the government.

The summer months, specifically from June until August, are when employment peaks in the industry. According to the report, 57 percent of the harvesting jobs occur during these months, with most of the jobs during the summer coming in salmon fisheries.

There were just over 24,700 harvesting jobs in the month of July in 2012. From June until August, all of the fisheries averaged a little over 20,000 jobs. Close to 80 percent of that job total occurred in the salmon fishing industry.

When the numbers are averaged out for the year, the jobs per month came in at the highest levels in Southeast Alaska. The next two highest averages were found in the Aleutians and South-Central Alaska.

The report also divided the jobs into categories dealing with the type of gear used by harvesters. The leading group was fishermen who use gillnet. That number came in at 1,706 fishermen in the category.

In February of 2013, the Alaska Department of Labor and Workforce Development issued surveys to just over 9,100 fishermen who hold permits. The survey was issued to figure out what the maximum crew requirements were for each month of the 2012 calendar year. Out of the surveys sent, 35 percent were sent back completed, with 94 percent of those respondents saying they fished in 2012.

For the year 2012, some $191 million were earned by harvesters, which averages out to roughly $21,700 per harvester. The entire report can be found online at the government site for the state of Alaska by looking for trends and November 2013.

How to Handle the Holidays if You’re Between Jobs?
Let’s Get Social
Feel like getting in touch or staying up to date with our latest news and updates?
Related Posts
Latest In Work Relationships