Home  » Rich People Have Different Toxins in Their Bodies Than Poor 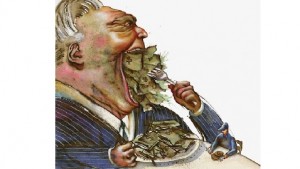 With forensic shows nowadays solving a murder using a bit of stray saliva, or analyzing some microscopic smudge on the floor and finding the culprit, we might wonder: what could science discover about me if it had unlimited access to my body? Morbidity aside, how fascinating! They might be able to discover all manner of curiosities even we haven’t guessed at. We all remember the moment when Britney Spears shaved her head, apparently to hide the traces of drugs she took. But what does our body tell us about how rich we are?

It seems there is a difference between the rich and the poor in what sorts of toxins accumulate in our systems. Differences in lifestyle means difference in vice, and being rich doesn’t make you immune to toxins.

In fact, rich people are higher in such chemicals as mercury, arsenic, cesium, and thallium, heavy metals associated with fish and shellfish, which are more like to appear on a millionaire’s cuisine – or at least sushi isn’t cheap. Jessica Tyrrell and her colleagues at the University of Exeter used data from the US National Health and Nutrition Survey to note the difference between rich and poor in their study.

They also discovered that rich people have higher levels of benzeophenone-3, or oxybenzone, the active ingredient in sunscreens that may in fact cause skin cancer. More time at the beach and less in the factory seems to have its drawbacks.

Not that the poor are chemically pure. They have more exposure to toxins associated with plastics and cigarettes smoke, and also higher levels of lead and cadmium, not to mention Bishphenal-A, a substance used to line food containers. Eating food from the can, and using a lot of plastic shows up in our blood, apparently.

Rich people eat more fruits and vegetables, poor people more junk food. But other than that, each has its own toxins, and a forensic scientist could, from your bare corpse, guess at how much money you had in your bank account.

Rich People Have Different Toxins in Their Bodies Than Poor by Andrew Ostler
Tags: diet, health, rich, science, study, wealthy
Tweet Like Plus Pin It Share

Solar Jobs Increased in 2013; Expected to Increase again in 2014
Let’s Get Social
Feel like getting in touch or staying up to date with our latest news and updates?
Related Posts
Latest In Work Relationships