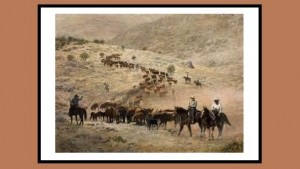 The economy could be viewed as a slow moving boulder that at times gets stuck in a rut and needs some oomph to get it rolling again, or like mindless cattle that can be stampeded in the right direction so long as a prod redirects the outliers. That’s how these folks at the Fed treat the cattle-headed investors who make this stupid thing called capitalism work. People invest, the rich take risks, jobs are opened, but they want a secure return. So the central bank has been calming the nerves of investors by buying up assets. This round of assets they will have bought up $1.2 trillion, twice last time. But being the “adults” of this situation, they must decide when enough’s enough and when they will taper off their investing in investment, when they will stop artificially prodding the economy, which under such actions is anything but a laissez faire pure capitalism.

Charles Even, president of the Chicago fed, is expecting the boulder to pick up sway, to gain 2.5 percent annual growth, compared to 1 percent the last three quarters and 3 percent in 2014. Once it gets that sway, the pushes of the Fed will be superfluous, and then they will stop throwing scraps to Cerberus and let the investors fend for themselves. Job seekers should be walking in grace at that time.

Atlanta Fed President Dennis Lockhart agreed that the Fed has no clue when they will slacken their stimulus incentives, whether it will be in September or December. They are looking for certain figures, 180,000 to 200,000 — up from only 150,000 jobs added in July, and perhaps something like 7 percent unemployment instead of its current 7.4. If the market does good, better than it has, continues in the right direction, but not so sluggishly as before, accelerating ,then the extra incentive of Scooby Snacks will be withdrawn. With the help of the housing market kicking in the second half of this year, this is in fact likely to happen, happy news for job seekers looking for investors to invest in them and hire.

LAPD Could Cut 160 Civilian Jobs
Let’s Get Social
Feel like getting in touch or staying up to date with our latest news and updates?
Related Posts
Latest In Work Relationships