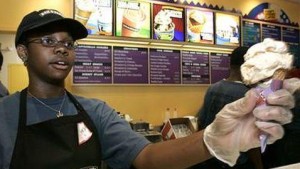 Since the 1950s, the number of young adults and teens with jobs is at its lowest level. The state of Utah has been able to fare better than most of the other states but still has not escaped the decline in numbers, per a report from KSL TV.

In Utah, just 36 percent of people from the ages of 16 to 19 had jobs in 2011. For the age group of 20 to 24, the number was 71 percent. Across the country, employment rates were compared to 26 percent for teenagers and 61 percent for young adults, which means Utah beat those stats but still suffered.

The report released is called “Youth and Work: Restoring Teen and Young Adult Connections to Opportunity.” It said that the employment rate for those two age groups has been declining since at an incredible rate since for quite a while now. The employment numbers amongst teens has dropped by half since the year 2000. Across the country, 6.5 million young people do not have jobs, with one and half million of them already parents.

The report said that employment in those age groups is even harder for those in minority populations and poverty situations.

“Although the employment rate fell significantly for all young people, the data show that those populations struggling most have less education, come from low income families and belong to a racial or ethnic minority,” the report states. “Fewer than 1 in 6 black and Asian teenagers and 1 in 5 Hispanic teens were employed in 2011, with ratios even worse for black and Asian males.”

“No one sector or system can solve this problem alone — it demands a collective and collaborative effort,” said Patrice Cromwell, director of economic development at the Casey Foundation. “Businesses, government, philanthropy and communities must work together with young people to help them develop the skills and experience they need to achieve long-term success and financial stability as adults.”

The report was funded and released by the Annie E. Casey Foundation.