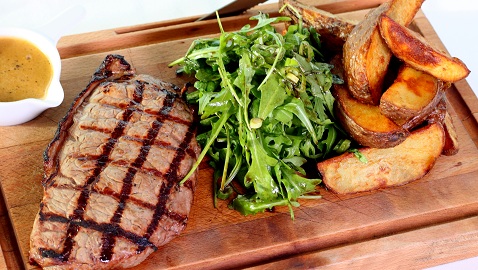 A man allegedly promised the executive chef position at the then-pending Wolfgang’s Steakhouse in Hawaii was removed from said position soon after the restaurant held its grand opening. He took the restaurant to court, bringing a number of charges against it.

Prior to the Steakhouse’s opening, the man agreed to an annual salary and signed a contract. In early January 2009, the chef worked at a Wolfgang’s Steakhouse in New York in preparation for his job. The restaurant paid for his flight to Honolulu and opened its doors to the public in February. One month later, however, the chef was told that he was “not aggressive enough” and was fired. The man countered with a lawsuit, with claims for breach of contrast, promissory estoppel, infliction of emotional distress, invasion of privacy and wrongful discharge.

The district court granted summary judgment favoring the restaurant on all claims save the breach of contract and promissory estoppel. Following a bench trial, the court rendered judgment for the remaining claims again in the Steakhouse’s favor. The chef appealed both decisions.

Regarding the breach of contract, the plaintiff asserted that he was promised employment for a full year. But the district court ruled that the agreement signed by both parties was an at-will agreement, meaning that the employer could terminate the man for any reason or none at all. Judges also believed that the plaintiff had not shown that he had adequately performed his duties, as required by the agreement.

The promissory estoppel is essentially a legal maneuver to enforce a promise made. It’s typically used when there’s no legal way to “avoid injustice,” but in this case, the man had the right to seek damages, which he did. This refuted the estoppel claim.

The plaintiff’s allegations also included the restaurant either negligently or intentionally inflicting emotional distress. This was hindered by the Hawaii Workers’ Compensation Statute, which bars civil claims against an employer except in cases of sexual harassment or abuse. In terms of emotion distress not related to his employment, the man had to show that a physical injury to someone – either himself or another person – had occurred but he could not, nor had he proven that he had experienced “severe emotional distress.”

The invasion of privacy claim asserted that the plaintiff was placed in a “false light” because he was fired for inadequacies which were through no fault of his own. But he testified in court that he was unaware of anyone being told that he was responsible for any of the restaurant’s problems. This claim failed, as did his contention that a public policy was violated by his wrongful discharge because he couldn’t pinpoint a specific policy that would support his claim.

The summary judgment and bench trial decision were affirmed. The plaintiff also appealed the district court’s award of attorneys’ fees. But he neither opposed the motion in the district court nor filed a notice of appeal subsequent to the filing of the order. Consequently, this appeal was deemed as untimely and could not be considered by the appeals court.

Man Alleges He Was Promised Chef Position For Full Year at Steakhouse in Honolulu by Harrison Barnes
Tags: breach of contract, employment termination, estoppel, lawsuit, restaurant, us court of appeals
Tweet Like Plus Pin It Share

4 Types of Bad Managers and How to Deal with Them
Let’s Get Social
Feel like getting in touch or staying up to date with our latest news and updates?
Related Posts
Latest In Work Relationships