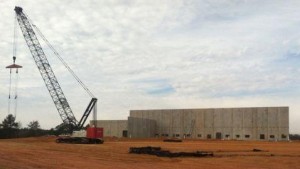 In November of 2011, the unemployment rate in Laurens County was at 12 percent. In November of 2012, that number dropped to 10.5 percent and it is expected to drop even further as two new facilities are going to bring some 400 new jobs to the area, according to a report from The Telegraph.

It was announced back in the month of March that Dinex, an automotive exhaust and emission systems manufacturer, would invest $15 million in the old Eldorado Stone plant building located in the Dublin Industrial District park. The company, which is Danish, would create at least 250 new jobs.

Cal Wray, the Dublin-Laurens County Development Authority President, said that the building was renovated at a cost of $600,000 prior to Dinex moving into it.

“There is nothing in that building that wasn’t touched,” he said. “We ground down the entire manufacturing floor and resurfaced it. We painted everything. … That was one of the advantages (to Dinex) is that we were able to turn it around so quickly.”

Wray noted that Dinex moved into the building on August 1 and began shipping products to customers just one month later.

“By the end of the year, they probably had 15 people on board, and they plan to hire an additional 50 to 100 this year with a potential expansion of the building in 2014,” he said.

In January of 2012, German company Erdrich Umformtechnic GmbH & Co., made an announcement that it would invest $39 million in a metal stamping facility located at the I-16 Industrial Park at Interstate 16 and Ga. 257. This new facility is going to bring in 178 new jobs.

“They are in full construction mode,” Wray said. “Structural steel is going up. The office is under construction.”

Close to 75 construction workers have been at the site working on the project, which has helped the economy. “That’s been a very good impact on our community,” Wray said.

Erdrich Umformtechnic has added two people so far, but should hire close to 10 more over the coming 60 days.

“The building will be finished roughly in May of this year,” Wray said. “Equipment will start being installed in July, with full production in January 2014. It’s exciting for our community. We’ve seen a lowering of our unemployment rate, an uptick in activity.”

In Dublin, SP Fiber Technologies announced that it would move its corporate headquarters from Atlanta to Dublin. Wray said that the move added anywhere from 35 to 40 new jobs.

Green Power Solutions announced in December that it was adding 35 to 40 jobs in Laurens County with a new $95 million power plant.

“So, it was a good year,” Wray said. “There was over $200 million of investments (announced) last year. There were 15 to 20 companies that located or expanded. Those together added about 500 jobs in the community. Of course, two (projects) make up the majority of that. But when you add up all the smaller jobs created, it’s just like a brand new industry.”