Home  » August Brings Bad News for the Economy, with Glints of Hope 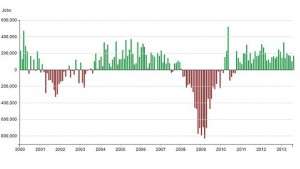 All this is dimly related to the government’s juggling of its various economic policies. It has decreased spending and increased payroll taxes recently, as part of its ongoing sequestration plan, in answer to the problem of the Fiscal Cliff. And another government control, the Federal Reserve’s artificial stimulation of the economy, encouraging investors to invest by buying bonds, persists, though they are not going to cut it off as quickly as they planned, now that the new numbers are in regarding June, July, and August.

Nevertheless, despite some of the bad news, which comes and goes like changes in the wind, there are some indications that things are about to get better. The average work week has increased from 34.5 hours from 34.4 hours, an indication that businesses might hire more soon. Likewise, 13,000 temporary workers have been employed, which companies often do before they hire some on permanently.

Other good news includes an average hourly earning rising 5 cents to $24.05 an hour. There is some indication that the minimum wage might be increased within the next year as well, not only in the interest of strikers, but as a plan to keep minimum wage abreast inflation.

The labor stats also indicate that retail and health care continue to lead the job gains. Health care, it seems, remains one of the smartest professions to get into, amidst the up and down of so many other industries after the economic recession.

Cost of Raising a Child Jumps 2.6 Percent
Let’s Get Social
Feel like getting in touch or staying up to date with our latest news and updates?
Related Posts
Latest In Work Relationships