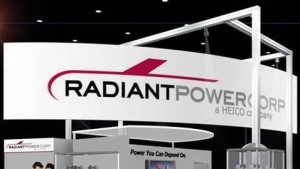 The Radiant Power Corp. announced via a press release with The Bradenton Times that it is going to increase its facility in Manatee County, Florida. The company designs and produces power and sensor products for commercial aviation and marine. This is the second time that the company is expanding its facility in less than a year. The expansion should bring roughly 16 new jobs to the facility over the next two years.

Governor Rick Scott said, “Every job created helps a Florida family, and Radiant Power’s progress is more proof that Florida is headed in the right direction. Since December of 2010, our state has created over 200,000 private-sector jobs. Though we’ve made great progress, our work is not done until every Floridian who wants a job has the opportunity to get one.”

The company has been operating in the county since 1999 and it increased its operations at the Manatee County facility last year. The expansion last year happened so the company could house a larger engineering team. That team is responsible for developing new products. The expansion was also needed for a business that it relocated from Hatsfield, Pennsylvania. The expansion announced today will add 4,000 square feet to the facility as Radiant relocates a company from St. Charles, Illinois.

The products made by Radiant Power are underwater locator beacons used to find aircraft cockpit voice recorders and flight data recorders, marine ship voyage recorders, and other electronic items that have fallen under water.

“This is our second expansion in less than a year, and we would not be able to grow our production and workforce at this rate without expedited assistance from the EDC [economic development corporation], Manatee County Government and the State of Florida,” said Anish Patel, president of Radiant Power.  “This latest expansion requires a capital investment of more than $650,000, which demonstrates our confidence in being able to deliver to global markets from our Manatee County location.”

The president and CEO of Manatee County’s EDC, Sharon Hillstrom, said, “Radiant Power has a proven track record in our community for capital investment and job creation. The company’s continued growth in Manatee County demonstrates the Bradenton area’s viability as a location for aviation and avionics-related manufacturing.”

The 16 new jobs Radiant is bringing to the county will pay an average annual wage that is 15 percent higher than the average yearly wage for the county.

“The Manatee Board of County Commissioners is focused on providing a business-friendly environment that spurs job creation for local residents,” Ed Hunzeker said. Hunzeker is the Manatee County administrator. “Carefully applying performance-based incentives and expediting permitting, where appropriate, are tools that give Manatee County an edge in competing for business expansion.”

June Hiring Better than Expected
Let’s Get Social
Feel like getting in touch or staying up to date with our latest news and updates?
Related Posts
Latest In Work Relationships