Home  » Over Half States Lost Jobs in July 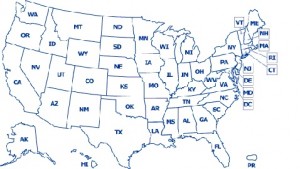 As the economy slowly heals itself, a few lags, plateaus, and drawbacks are to be expected along the way, especially considering what a dynamic field we are talking about, with sequestration taking its toll on federal jobs and increasing taxes to their highest rate on income. That’s why job seekers don’t have to be too discouraged now that unemployment has rose in more than half U.S. states in July. Nevertheless, the question is, what states are doing well and what are doing poorly?

Unemployment increased in 28 states, but a few states are doing well, with North Dakota at only 3 percent unemployment. California has made the most drastic change this last year, improving from 10.6 percent last year to 8.7 percent now. It is leading the West in job recovery, and bolstering figures for the West. And job seekers might do well to look West or South where jobs are recovering the quickest, unlike the Midwest, which has seen a change only of 7.3 percent to 7.5 percent this last year. While that’s still a sight better than the West, which is at 7.9 percent, they were at 9.3 percent last year, and so have made the biggest recovery.