Home  » All But Seven States Get Better Unemployment Rates 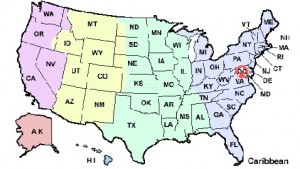 A report from the Labor Department released this Friday reveals that 43 out of 50 states improved over last year when it comes to employment – excluding Illinois, Delaware, Indiana, Wisconsin, Mississippi, and New Hampshire.

“April data reflects the unevenness of this recovery” said the director of the Illinois employment department, Jay Rowell, according to Reuters. “This uneven path forward likely will continue until consumer and business confidence can be sustained at the national level.”

Perhaps a little face-saving went into the remark, but despite seven uneven states, the overall improvement is remarkable, and worth celebrating, and what’s more, average pay rates are going up as well.

Places like North Dakota or doing especially well, with only a 3.3 unemployment rate – and this with their commodities boom of 28,600 mining and logging jobs.

That the employment rates are improving even during “spring swoon,” that time of year when less hiring happens, indicates that we could be due for a good rest of the year.

Unemployment Rise in D.C, Md. and Va. an Early Warning
Let’s Get Social
Feel like getting in touch or staying up to date with our latest news and updates?
Related Posts
Latest In Work Relationships