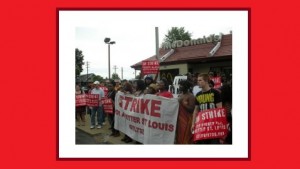 As fast-food workers strike, in what began in New York eight months ago, and spread to other cities, demanding a pay increase of double what they are making, up to $15 an hour, there is the economic question of what a pay raise actually does for minimum wage workers. Keeping up with inflation is one argument, but meanwhile, raising the minimum wage serves to reduce employment for low-skill workers.

Fast food is made up of only 10 percent upper tier workers. 90 percent of them are the come-and-go entry level jobs, that act as a sorting mechanism, as such workers are often youths with in intent on staying at the job.

Instead of straight up raises in the minimum wage, and especially at such a drastic demand, which economically would not work out to such a utopia as anticipated, businesses could work out better benefits programs and also provide on the job training letting workers gain valuable experience. Entry level jobs have long been low-paying and difficult to support a house on. But with the Economic Policy Institute claiming that a New York family of four requires $93,000 for a  median household income – about double of what it in fact is – expecting wage-payers to rise to such a demands is economically impossible. And were it possible, things would not work out as hoped. Job seekers would be competing for fewer jobs.

The minimum wage does better at keeping pace with inflation, while workers educate themselves and get experience that increase the value of their output, and the scarcity and value of their skills. Seeking jobs that give them such a lift is integral. To encourage such a progression, minimum wage levels may not be the levers to pull. The solution to such economic situations is not to put out fires by smothering with money: the money soon burns up.

Jobless Claims Drop by 10,000, a Ray of October Sun
Let’s Get Social
Feel like getting in touch or staying up to date with our latest news and updates?
Related Posts
Latest In Work Relationships