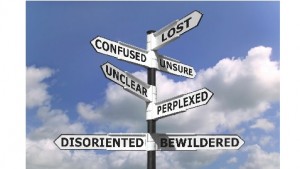 With something as long term and ongoing as the economic recovery, it’s important to keep patient with conflicting reports that “things are turned around now,” or “things are doing poorly.” Such absolutist statements leave many of us confused in their contradictions, and if you are uncertain whether to celebrate or to mourn, you’re not alone: the markets were volatile today over whether the job market is improving or not. We’ve heard lots of good things from the Feds, among others, that auto sales are booming, real estate nosing up, bank lending doing wonderfully. But then there are “minority reports” such as those from the ADP that did a report on private sector employment that found employment to be weaker than expected. Ditto says an employment gauge released as part of a survey of purchasing managers in the services industry, as reported by CNBC.

The Fed’s Beige Book was released, and they remain optimistic about the economy. Over all, that seems to be the main tone and impression. But as for a play-by-play, that could keep us as heated and bothered as listening to a sport’s announcer. Any moment, the job market might dip, might disappoint us, and confuse us, making us debate whether anybody is hiring or not. If playing the market, developing ulcers over such things is part of business as usual. But for the rest of us, we can feel assured that things really are improving, despite a few minority reports. Employment really is improving, with a few dips and bumps on the way.

Unemployment Up a Bit, in Latest Figures
Let’s Get Social
Feel like getting in touch or staying up to date with our latest news and updates?
Related Posts
Latest In Work Relationships