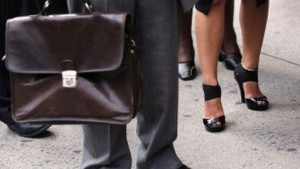 The October employment report is scheduled to be released on Friday and it will be the final one prior to the Presidential election on Tuesday. According to Reuters, the report for October is expected to show just 125,000 new nonfarm payrolls and an unemployment rate of 7.8 percent.

This report is very important to keep an eye on because economists believe that less hiring will occur in the wake of Hurricane Sandy, which ravaged the East Coast from parts of Florida to parts of Maine. Economists believe hiring will be low even though construction companies will need crew members to help the East Coast rebuild. Early economic impact estimates from Sandy are coming in as high as $50 billion. On Thursday, Eqecat said that insured damage will fall between $10 to $20 billion, with 64 percent of the insured losses coming in New Jersey and New York.

“We won’t see the effect of hurricane Sandy or storm Sandy (in the October report)…It won’t show up because the survey was taken before the disaster hit,” said Diane Swonk, chief economist at Mesirow Financial, according to CNBC.

“Any interruption to hours worked and hourly workers, it would be somewhat offset in the month of November by the increase in overtime for emergency workers and with the increase with construction workers coming in. It redistributes employment because of the need to get things up and running as quickly as possible. It ends up being winners and losers,” she said.

Swonk did say that the economy will receive some fiscal stimulant as aid is sent to the areas hit hardest along the East Coast from the storm. “There will be some enormous government investment outlays from Sandy. That money is literally being dropped from the skies, from helicopters. How it shows up in the numbers has yet to be seen because there are offsets.”

Joseph LaVorgna, the chief U.S. economist for Deutsche Bank, said that hiring for November could be greatly affected by Sandy. “It could be 100,000, maybe more. Even though you see clear impact on things like retail sales, industrial production and employment, it’s hard to tease out what the effects are on GDP.”

Private sector employment gained 158,000 employees in October, according to ADP. ADP also revised its numbers for September, dropping the job gains from 162,000 to 88,200. The report is scheduled to be released at 8:30 a.m. ET on Friday morning. “It shouldn’t be significantly stronger, or significantly weaker,” said LaVorgna. He said that he thinks the election played a part in hiring recently. “I think there was an election effect. You had a lot of young people volunteering and getting paid. We did see a lot of 20 to 24-year old hiring last month,” he said.

October Job Scare
Let’s Get Social
Feel like getting in touch or staying up to date with our latest news and updates?
Related Posts
Latest In Work Relationships