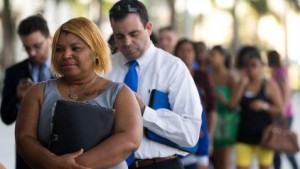 On Friday, the Labor Department said that job growth increased at the end of 2012 quicker than originally thought, according to The New York Times. In the month of January, employers added 157,000 jobs to their payrolls, but the unemployment rate still increased to 7.9 percent. The revisions to the jobs report made those working on Wall Street very happy as the Dow Jones industrial average went over 14,000 for the first time since 2007.

“The economy, sales, employment and the stock market are all higher in spite of the bickering and rancor in Washington,” said Bernard Baumohl. Baumohl is the chief global economist at the Economic Outlook Group. He said that the new numbers “all point to an economy that is building steam and a private sector that seems almost dismissive to the sequestration and debt ceiling threats from Washington.”

Despite all of this, job growth continues to be modest and the rate of unemployment has been sitting a tick or two under eight since the month of September. With all of this, D.C. is preparing for another round of fiscal policy fighting as March 1 is the date for spending cuts to kick in if Congress does not reach a bargain on the budget.

“Negotiations over the debt ceiling and the budget resolution and sequestration have the potential to be very messy and very extended,” said Ian Shepherdson. Shepherdson is the chief economist at Pantheon Macroeconomic Advisors. He said that businesses appear “very vulnerable to surprises. I don’t think we’ve got the solidity and robustness and willingness to look beyond these short-term disturbances yet.”

The construction industry was one of the most encouraging industries in the jobs report released on Friday. The industry has now added jobs in each month for the last four months. This addition of jobs likely came from the rebuilding efforts along the East Coast in the wake of Hurricane Sandy and the unseasonably warm weather in other areas of the country, according to Joshua Shapiro. Shapiro is the chief United States economist for MFR.

Also in the month of January, the industries of health care, retailing and wholesale trade added jobs. Once again, the government dropped jobs last month. Alan B. Krueger, the chairman of President Barack Obama’s Council of Economic Advisers, said that the report was “a reminder of the importance of the need for Congress to act to avoid self-inflicted wounds to the economy.”

Mary Livingston is a human resources professional who was laid off two years ago on Friday. She said, “I have been working for 40 years and I have looked for jobs many times in the past, including in bad economies, and I’ve never experienced anything like this.”