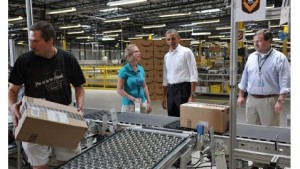 President Barack Obama talked at an Amazon warehouse in Chattanooga, Tenn., this Tuesday, unveiling his plan that he hopes will gain bipartisan sympathies. His plan aims to overhaul the corporate tax system in exchange for assurance that the resulting revenue will be used to create jobs. He is hoping for a plan that will create jobs while rebuilding roads and bridges, boosting our employment while strengthening our infrastructure at the same time.

“I don’t want to go through the same old arguments where I propose an idea and the Republicans just say no because it’s my idea,” Mr. Obama said. “I’m going to try offering something that serious people in both parties should be able to support: A deal that simplifies the tax code for our businesses and creates good jobs with good wages for middle-class folks who work at those businesses.”

Some Republican politicians have been sympathetic, whereas others wonder what concessions, if any, Obama is making in this plan.

One of the problems the government faces currently is the tax code which inadvertently encourages large companies to hold moneys overseas. Of the $1.32 trillion in case U.S. companies are earning, 58 percent, or $840 billion is held overseas, where it cannot be taxed. New codes would put a smaller tax on businesses holding and cajole them to bring their money back into the States. This will boost jobs as well.

Whether small businesses are left behind or not is a matter of dispute, a problem Obama is trying to circumvent. That he is considering tax plans that Republicans are likely to take despite their distrust of him suggests that built-in negotiations have been taken into account. This could be good news for job-seekers everywhere, if bipartisan agreement can be reached.

State of Maryland Adds 9,800 Jobs in September
Let’s Get Social
Feel like getting in touch or staying up to date with our latest news and updates?
Related Posts
Latest In Work Relationships