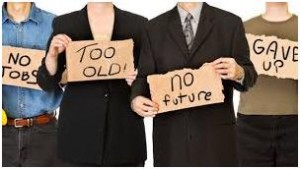 A new study revealed that the long-term unemployed in the United States have found full-time work at just an 11-percent clip, according to Bloomberg. The study looked at people who were unemployed for more than six months.

The study was performed by three economists from Princeton University. There are 3.8 million people in the country who are in the long-term unemployed category, which accounts for 37 percent of all unemployed Americans.

“The long-term unemployed are more than twice as likely” to end their search for a job than to find a new one. The paper was co-written by Alan Krueger, the former chief economic adviser to President Barack Obama. “And when they exit the labor force, the long-term unemployed tend to say they no longer want a job.”

A little over one in 10 of the long-term unemployed found full-time work during any given month from 2008 to 2012. These issues were seen in states that had both high and low unemployment rates. The study shows that hiring can be better predicted by looking at the short-term unemployed. They are people who are most likely to find jobs quicker.

Despite the unemployment rate sitting at 6.7 percent, the levels of short-term unemployment have moved back towards their pre-recession averages. The study states that due to the number of short-term unemployed, future job gains could cause “rising inflation and stronger real wage growth.” The reason for this is that employers have a smaller pool of workers to choose from when hiring for open positions due to long-term unemployed being excluded. This trend could push prices upward.

Janet Yellen, the Federal Reserve Chair, said that the Fed should continue supporting the recovery by keeping interest rates as low as possible. Yellen stated low inflation and flat wages as reasons why the Fed should help the economic recovery.

Since the recession started at the end of 2007, the number of unemployed Americans for more than six months has tripled. In the beginning of 2010, the number peaked at 6.77 million. The number has declined, but is still very high. The reason for the decline is the fact that people have stopped looking for jobs and are no longer considered unemployed.

The National Employment Law Project reports that some 2 million Americans who would have been eligible for the emergency benefits program have lost the assistance. A requirement for the benefits is that people receiving them must show they are looking for a job. Since those benefits have been lost, many of those people probably stopped looking for a job.

What Does Government Shut Down Mean for Job Seekers?
Let’s Get Social
Feel like getting in touch or staying up to date with our latest news and updates?
Related Posts
Latest In Work Relationships