Home  » Ohio Could Ban Internet Cafes, Which Would Cut Thousands of Jobs 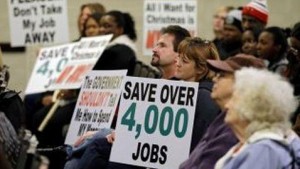 Employees and owners of Internet cafes, known for storefront gambling operations, lobbied on Monday to keep their jobs, according to the Houston Chronicle. It the Internet cafes are shutdown, close to 4,000 people could lose their jobs.

The employees and owners met in the ballroom of a hotel holding signs that said “Please save our jobs” and “All I want for Christmas is my job.” Those in attendance at the rally said that the rally will be held a couple more times in the Columbus area as a vote by the Ohio Senate regarding the issue comes into focus.

Quite a few cities within the state have worked to have the cafes shutdown but have lost in court. The campaign to close the businesses has been led by Mike DeWine, the Ohio Attorney General. He said that there is no guarantee that the games at the cafes are fair and that there is no method available to track where the money is sent.

An operator of one cafe and a consultant within the industry, Bryan Sanshuck, said that if the government bans these businesses and puts people out of work before the holiday it would be a shame. “Ohioans do not fire Ohioans three weeks before Christmas,” he said.

In Chardon, not far from Cleveland, Jon Ballog operates his Internet cafe. He said that a government ban would create an incredible economic problem for those who have spent anywhere from $100,000 to $300,000 to open the business.

“There’s a lot of operators out there currently who opened stores who still haven’t recouped their investment,” he said. “Some of these people are going to go bankrupt. They’ve taken credits out, they’ve taken second mortgages to pay for these businesses and get them off the ground.”

Bill Patmon, a State Representative and a Cleveland Democrat, said that as gambling has expanded into casinos in the state and with the addition of slot machines at race tracks, the state has begun to favor some businesses over other businesses.

“Government should not pick winners and losers,” Patmon said. Patmon also said that if the casino in Cleveland is permitted to operate, then, “it ought to be OK for the small business person in the neighborhood who’s creating jobs.”

Bank of America Considers Ending Overdraft Fees
Let’s Get Social
Feel like getting in touch or staying up to date with our latest news and updates?
Related Posts
Latest In Work Relationships