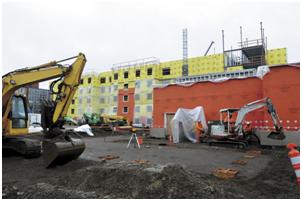 An Oregon Employment Department report shows that several counties, including Lincoln, Linn, and Benton, will be adding nearly 12,000 jobs within the span of ten years. Finding out this information was good news for the state, especially since growth in jobs had come to a halt during the recession and even a bit before then. An economist who works with the department, Pat O’ Connor, claims that while the report shows relatively good news, there are still a few lingering concerns, according to the Corvallis Gazette-Times.

The report painted a picture of certain trends that have been ongoing for several years now. One of the trends shows that the health care sector is booming. Jobs in this health care sector have become more available due to an increasing number of individuals who are getting older and because the recession has ended.

The recovery from the recession has been going on for many years now, and progress is being made within the health care industry. In fact, the department believes that at least 2,000 of the jobs that will be made available in the coming years will be in this industry alone.

According to O’Connor, the one trend that residents of the area should feel concerned about is the lack of middle-wage jobs. Fewer middle-wage jobs have become available, leaving only low-wage and high-wage jobs.

Those without the skills, qualifications, and credentials to obtain the higher paying jobs are then stuck earning low wages because there is nothing in the middle for them to apply for to earn more, which could be troubling for many families. While jobs are being added, many of them require little to no training and skills, which means the pay for employees will be much lower and may not allow people to earn enough to support livelihoods.

While some of the projections may be a bit off, most of the projects are right on target when it comes to the number of jobs eliminated and the number of jobs created within different sectors. The report that the department developed does show that some of the sectors that were hit the hardest during the recession will begin having better luck with many more opportunities to come.

Those sectors that were hit hardest include the construction and manufacturing sectors. O’Connor explains that this has happened to the United States before, which is what causes The Great Depression to occur. One thing is certain, Oregon and other areas across the country are working on picking up the pieces that were ruined when the recession hit its hardest.