Home  » Workers at Hostess Would Rather be Unemployed 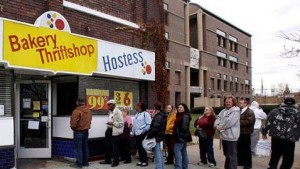 In a report from Reuters, workers with the Bakery, Confectionery, Tobacco and Grain Millers (BCTGM) Union approved a strike early in November of Hostess after the company was given approval in court to pursue bankruptcy so it could implement wage cuts that were not in the workers’ contracts.

Hostess was awarded approval on Wednesday by the court to start its liquidation process, which includes selling its brand and cutting employees. Almost 15,000 jobs will be cut immediately with another 3,000 jobs being cut over a span of four months. Reuters spoke with about a dozen employees from Hostess who said they did not have much regret for voting for the strike. The employees said that they would rather be unemployed than deal with poor benefits and lower wages.

“They’re just taking from us,” said Kenneth Johnson, 46, of Missouri. Johnson noted that he made $35,000 with overtime hours in 2011, which was a decrease from $45,000 just five years ago. “I really can’t afford to not be working, but this is not worth it. I’d rather go work somewhere else or draw unemployment,” Johnson said. He has been with Hostess for 23 years.

Hostess employees 18,500 people and has 12 unions. The bakers union has 5,600 members and the International Brotherhood of Teamsters has the largest number of members at Hostess, with 7,500. Lance Ignon spoke to Reuters on behalf of Hostess, saying that the company understands how hard the past couple of years have been for the employees and wished it did not have to ask for more concessions.

“But the reality was that the company could not survive without those concessions,” Ignon said.

Employees had a list of complaints that included decreased wages, rising healthcare costs and delayed pension benefits. The employees also noted a $10-per-week per worker change that the company claimed was needed to increase the company’s capital.

“They have taken and taken and taken from us,” said Debi White. White has been with Hostess for 26 years in Lenexa, Kansas. “They have been walking around stomping their foot saying either you give in … or else we’re going to close you now. Well, go ahead, we’re tired of their threats. That’s how we feel.”

The Teamsters union was so fearful for a loss of thousands of jobs that it asked the BCTGM union to call for a secret ballot to find out if the members of that union really did want to strike. Officials from the Teamsters union said that leader from BCTGM did “not substantively look for a solution or engage in the process,” and also announced its strike on November 9 without telling the Teamsters union.

EEOC Discrimination Lawsuit Statistics Show Little Change
Let’s Get Social
Feel like getting in touch or staying up to date with our latest news and updates?
Related Posts
Latest In Work Relationships