Home  » New Law Spells Curtains For Mississippi Abortion Clinic: But They Aren’t Going Out Without A Fight 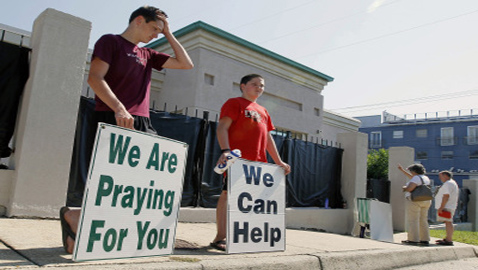 The New Year could herald bad tidings for the only abortion clinic in Mississippi, following a new law that necessitates obtaining admitting privileges to local hospitals, by its physicians. As of now, the only things that could prevent the Clinic from downing its shutters if a federal judge forbids the new law from coming into effect.

The new law says that for the clinic to continue its operations it must employ the services of a board-certified obstetrician gynecologist who also has admitting privileges to a local hospital, where patients can be sent to if  they require treatment that is not available at the abortion clinic.

The doctors at the clinic are board-certified obstetrician gynecologists but among them only one has admitting privileges but offers only part time services at the clinic.

The clinic has advertised on its website for a doctor, who was capable of handling serious cases and performs abortion care for patients in advanced stages of pregnancy.

Mississippi’s abortion laws are among the strictest in the country owing to which from having 14 abortion clinics in the 1980s, it has been reduced to one. Moreover, Mississippi has the highest teen pregnancy rates and yet, ironically the lowest abortion rates. Mississippi’s 55 births per 1,000 teens is more than 60 percent above the U.S. average.

Jackson Women’s Health Organization has been the state’s sole clinic since the last decade. It filed a motion in court seeking prevention of the law that could force it to close.

Those who would like to see a blanket ban on abortions in the state said that it seems highly improbable that the Jackson clinic will be able to comply with the new law, even though it has up to January to comply.

Clinic owner Diane Derzis did not sound very optimistic saying that her applications to all the hospitals within a 30-mile radius, on behalf of her physicians was met with staunch refusal, with some even refusing to consider her request.

Hospitals who denied her request said that it was contradictory with their hospital’s policies regarding abortions and could seriously impact their business and their relationship with its patrons.

Those who are not in favor of the clinic closing argue that the law is forcing its will on the women of Mississippi, who will no longer have access to abortion within the state and have to travel long distances if the need arose. They called the law unconstitutional.

The nearest clinic is three hours away and has a 24 hour waiting list and most clinics require women seeking abortion to make more than one visit.

They said that that the law essentially amounted to putting Mississippi women’s reproductive health care at the mercy of hospital administrators and insisted that competent and committed people at Jackson Women’s Health Organization should be allowed to continue the great work that they were doing without such intimidation and coercion.

Betty Thompson, a spokesperson for the Jackson Women’s Health Organization, said that the hospitals workers were on tenterhooks waiting for what would happen next. She said that of the nearly 2000 patients it served last year, a majority were indigent low-income women and adolescent teenagers.

Nancy Northup, president and CEO at the Center for Reproductive Rights said, that the women in Mississippi are entitled to the same legitimate rights as other American women and “They deserve far better than to be forced to travel hundreds of miles to another state to get a safe, legal medical procedure.”

New Law Spells Curtains For Mississippi Abortion Clinic: But They Aren’t Going Out Without A Fight by Harrison Barnes
Tags: health and safety
Tweet Like Plus Pin It Share